The 2023 BMW XM is BMW’s first standalone M-branded vehicle, since the iconic M1 coupe. The XM was previewed by the Concept XM last year and now we have the production version, which looks pretty close to the concept. It’s styling isn’t for everyone, but once you get passed that, the XM is a pretty nice addition.

If you liked the Concept XM then you’ll like the production version, since the only big noticeable differences are rear door handles, toned down taillights and the deletion of the two-tone paint. Compared to the X7, which it is based on, the 2023 XM is about 2 inches shorter, 3 inches lower and also a bit wider. At the front the big two kidney grilles have an outline that can be illuminated, while the rear retains the rear hatch glass from the concept, which is inspired by the M1’s rear. It even has two BMW roundels laser engraved into the glass.

The outside also gets a special piece of trim that encircles the windows, which comes standard in gloss black, but a nice NightGold color is optional. The gold trim can also be added to the outline of the kidney grille and diffuser. There will be seven available colors at launch and the XM comes standard with massive 23-inch wheels. Smaller 22-inch M aerodynamic wheels are optional.

More importantly, what powers the XM? The XM’s powertrain features the twin-turbo 4.4-liter V8, that’s mated to an electric motor and an eight-speed automatic transmission. The plug-in hybrid powertrain generates a combined 644 horsepower and 590 pound-feet of torque The electric motor is powered by a 29.5-kilowatt-hour battery pack, which gives it a 30 mile electric range. According to BMW, the XM can accelerate from 0-60 mph in 4.1 seconds and has a top speed of 155 mph, which can be increased to 168 mph with the M Driver’s Package. In pure electric mode it tops out at 87 mph and the battery pack can be recharged in 3.5 hours.

If you want more power, there’s the XM Label Red that’s coming next summer with over 735 hp.

The plug-in hybrid powertrain is mated to a rear-biased all-wheel drive system that can send all that power to either the front or rear axle. There are three drive modes: Hybrid, Electric and eControl, while the xDrive system has three modes: default, Sport and Sand. There’s also the M Sport electronic locking rear differential, Integral Active Steering and electromechanical active roll stabilization to make this SUV live up to its M name. 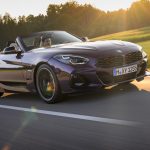 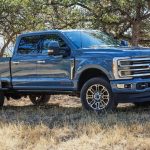