The Honda HR-V shows that family life can be charming, even on a budget. The HR-V epitomizes the crossover segment by straddling the style difference between a hatchback and SUV, while prioritizing  affordability. The small crossover competes against the Volkswagen Taos, Subaru Crosstrek, and Hyundai Venue. For 2023, the second-generation HR-V grows into a space once occupied by the CR-V in all but height. There’s something about its roofline and profile that says hatchback much more loudly than SUV. 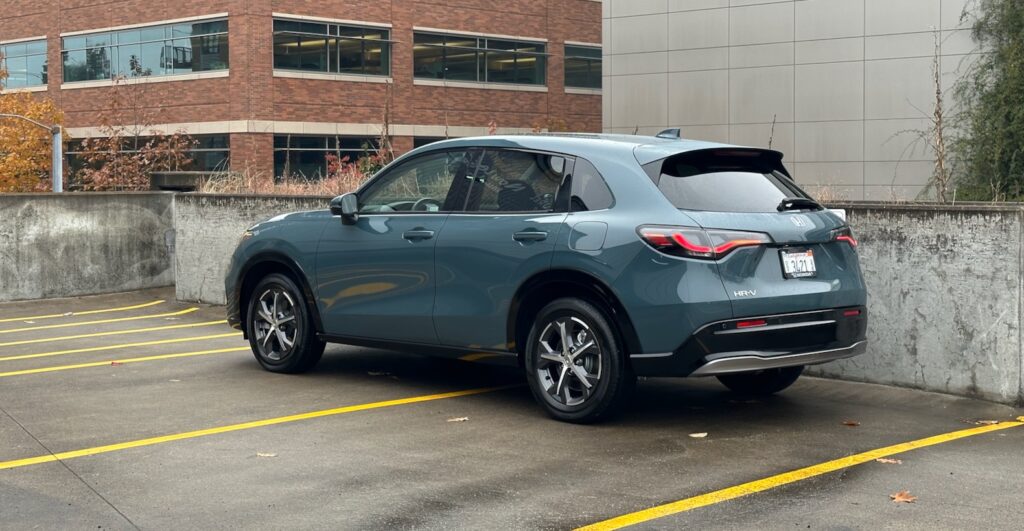 There’s no bold statement here; it’s charming and uncluttered. The profile and proportions of the HR-V blend into the sea of small crossovers, but small details flaunt the HRV’s charm. For that, we rate both the exterior and interior styling a step above the norm. The HR-V sheds the gawky, creased look of the outgoing model, in favor of a design that’s cleaner and visually lower, thanks to the long hood and mostly car-like proportions. It reflects design elements elsewhere in the Honda stable, such as a roofline like the new Acura MDX, and tail lights shared with the forthcoming CR-V.

Each trim level does the design details a little bit different. Sport models have a blacked-out look, plus black 18-inch wheels. Base LX and top-trim EX-L models get 17-inch gunmetal wheels and a honeycomb look to the grille. Some of the details borrowed from the HR-V’s distant Honda E cousin overseas, like the round of the hatch, help the design pop.

The HR-V won’t satisfy speed freaks, but its ride and handling take the edge off the daily grind. The HR-V isn’t all that quick or fast, but it makes up for that with exceptionally well-tuned ride, handling, and braking attributes, and all the sensory pieces that go along with it. The HR-V is front-wheel-drive by default, but for $1,500 extra its all-wheel-drive setup employs hydraulics to operate a clutch and direct nearly half of torque to the rear wheels when needed. At 3,333 pounds, the top HR-V weighs about the same as a base CR-V. So what the HR-V has under the hood is adequate but it never feels frisky.

Like decades of Honda non-turbo inline-4s before it, the 158-hp, 2.0-liter is a smooth but vocal engine when pressed into its upper reaches to extract the most acceleration. The engine and CVT aren’t a great pair for drivability. In ‘D’ the CVT tries to keep the revs as low as possible, which regularly leaves the engine feeling winded, waiting for a “downshift” to lower ratios. Push harder and the CVT accesses ratios that mimic those of a traditional automatic transmission. Shift to ‘S’ and the CVT makes more of those ratios, improving on drivability in case of hills and curves.

Core underpinnings for the HR-V are borrowed from the Civic and the CR-V, but it drives far more like a somewhat higher-riding, more softly sprung Civic, a Civic Outback, if you will. But compared to the Subaru Crosstrek, the HR-V is a wonderfully refined machine on the road. Honda borrowed the CR-V’s rear floating subframe and independent multi-link suspension layout. With steering stability specially tuned for this vehicle it amounts to a very confident feel around tight corners and over harsh pavement surfaces or on gravel roads. There’s no dedicated off-road mode here, but Snow mode allows more slip from the stability system and distributes torque a little more evenly by default. There’s also a descent control setting for helping control a low-speed crawl down a steep trail. 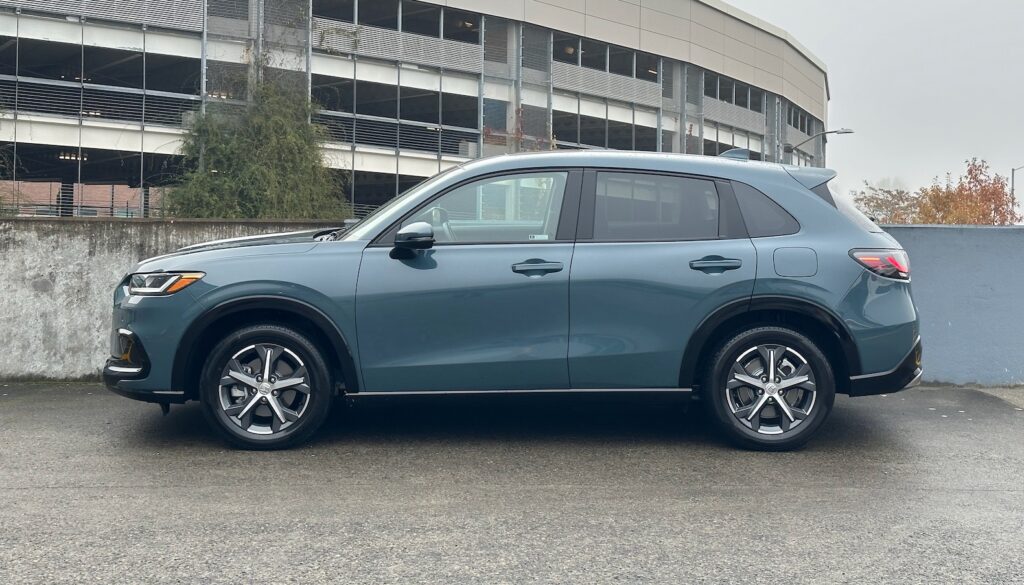 Efficiency is no hallmark here. All-wheel-drive versions of the HR-V are rated 25 mpg city, 30 highway, 27 combined, and front-wheel-drive versions get ratings of 26/32/28 mpg. Not only is it less efficient than rivals, it’s 2 mpg lower than last year’s HR-V, and lower than Honda’s larger CR-V. That said, we did better than the HR-V’s official figures, averaging around 30 mpg in a range of rapid road-trip conditions. Those seeking to make the most of HR-V efficiency can select the Econ mode, which softens accelerator and shift behavior somewhat and sends the climate control system into a somewhat more efficient mode.

The HR-V borrows from other Hondas, though there are only partial crash-test ratings yet since both the NHTSA have yet to test the new HR-V. Meanwhile, the IIHS awards the new 2023 Honda HR-V it’s highest Top Safety Pick+ award receiving Good ratings in every measure except Headlights which were rated Acceptable. The entire HR-V lineup includes 10 standard airbags plus automatic emergency braking, active lane control, and adaptive cruise control. There’s also a road-departure mitigation feature that fine-tunes steering and/or braking to help prevent a loss of control. These systems are part of a new single-camera Honda Sensing system. The only safety features omitted on lower-trim versions are blind-spot monitors and a low-speed braking control feature (added in EX-L versions). 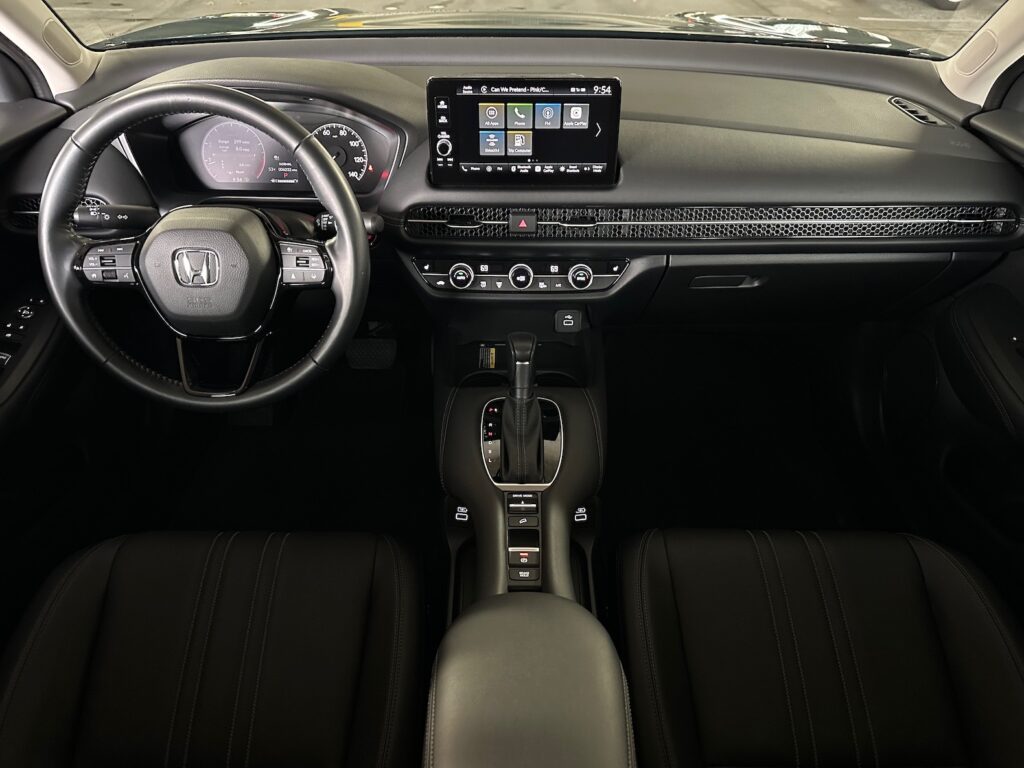 The interior design stands out for what it’s missing, as much as the theme itself. Thanks to some smart engineering and design, you won’t find thick front pillars, unnecessarily complex interfaces, or a lot of bright, reflective surfaces (those with migraines, rejoice). Otherwise, it adopts much of the latest Civic’s interior, with a metallic honeycomb beltline spanning the vents and dash. The dash itself sits low, allowing lots of outward visibility. Above it stands an infotainment screen while below it are simplified climate controls. The only complex design item carried over from the outgoing HR-V is the bridge-like center console, which allows a mounting point for the shifter, drive mode buttons, and storage space beneath.

The new HR-V might not fit your dog and gear as well as last year’s model, but it fits people better. The HR-V is bigger and more comfortable than the previous HR-V. It’s nudged cleverly close to the Toyota RAV4, Nissan Rogue, Ford Escape, and others that now epitomize the heart of the U.S. affordable family car market, but it sketches out the proportions just a bit differently.

To that, the interior shows some dramatically different priorities. There are no more flip-upright Magic Seats, like you have in the previous HR-V or Fit, which allowed you to fit a very big dog or a very tall potted plant in the HR-V. No cargo hooks for carabiners, or carved-out spaces for muddy boots or gear, either. Instead the HR-V swaps in a larger cargo area, a more comfortable back seat, and the independent rear suspension that helps enable better ride quality.

The passenger compartment of the HR-V isn’t technically that much larger than that of its predecessor, but it feels among the roomiest and most comfortable in its class, especially in back. A new generation of seats helps optimize posture and more evenly distribute support. From seating to door cuts, this is a subcompact vehicle that doesn’t feel so compact inside for passengers, even for 6-foot-6 passengers. The HR-V is also fairly quiet in a way that’s rare in this class. Honda boasts of additional sound insulation in the doors, dash, floor, and trunk lining, plus an acoustic windshield, and it all pays off.

You won’t find a power tailgate release in the HR-V, but you don’t need one. It’s all down at a level most people will find easy to grab and lift, and the 27-inch liftover height for the long cargo floor provides an easy 24.4-cubic-foot space for lugging luggage or getting a big tray of plant starts back from the garden store. The 60/40-split folding rear seats fold almost fully flat, allowing 55.1 cubic ft, enough space for small pieces of furniture or some of that outdoor gear. A wide hatch opening helps.

The HR-V is a tremendous value. The 2023 Honda HR-V adds up to something even more value-focused. For its low base price and strong value, its long list of base features, and excellent infotainment systems, it’s tops for value. Automatic climate control, power windows, alloy wheels, and a full set of Honda Sensing driver-assist items are included in all HR-V versions, including base LX, mid-range Sport, and top-trim EX-L. All three versions include Apple CarPlay and Android Auto compatibility, with wireless versions supported by the larger 9.0-inch system found in EX-L versions.

The base LX is looking like the best bargain to us. We can’t think of a single crossover that feels so refined and “together” and costs less than $25,000 for the 2023 model year. Unless you love the look of the Sport, you may want to look beyond its added heated seats and moonroof to the top EX-L for all of its extra tech and bigger infotainment screen. The top-level EX-L version costs $30,195 with all-wheel drive. In addition to wheel and trim upgrades, it has dual-zone automatic climate control, LED ambient lighting, leather upholstery, a power driver’s seat, and a larger 9.0-inch infotainment system with wireless smartphone compatibility,  satellite radio, and a volume knob.

Honda’s all new HR-V for 2023 is all grown up now. The new HR-V is an impressive cute ‘ute that now upped the ante for every other competitor. The HR-V driving manners are now one of the best in its class. It has room for four, styling that won’t offend, and can economically get you from A-to-B with most of your stuff while venturing casually offroad. All the while the HR-V does one thing no others can match; it’s a Honda with great value, top safety ratings, and with years of reliability ahead of it.