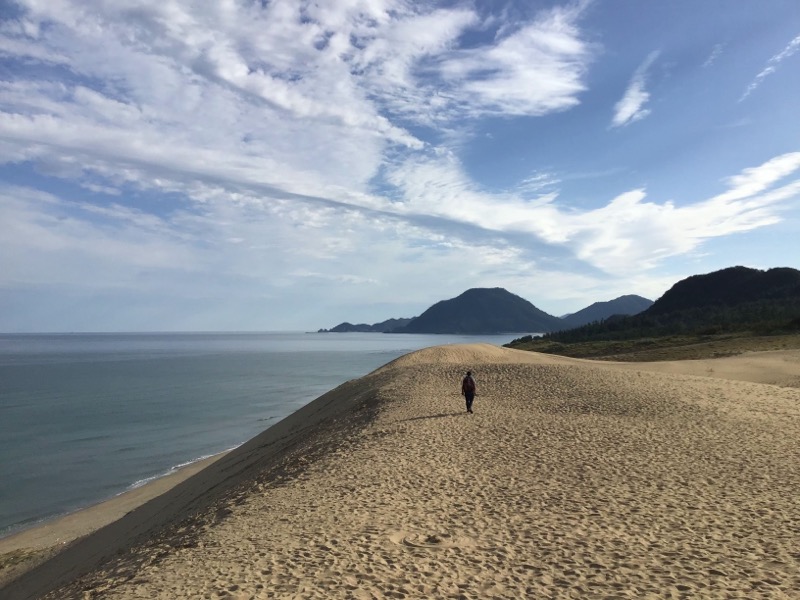 Traveling to Tottori, the most remote prefecture in Japan, is like stepping out into the technicolor world of The Wizard of Oz. It’s disorienting.

More than a few eyebrows will raise in surprise. But that’s one of the chief joys of taking the time to travel around Japan – this is a country bursting with unexpected surprises. Tottori is Japan’s most rural area. With less than 150,000 residents, it is the least populated of Japan’s 47 prefectures. Located on the Western Coast of Japan, Tottori is known for its nashi (Japanese pears) and Matsubi snow crab.

Make no mistake, it takes planning and effort to get to this part of Japan. It definitely requires a fair amount of confidence. However, those who brave a journey to Tottori, Japan, will find an environment unlike any other.

Here are six memorable experiences to try if you venture to Tottori. 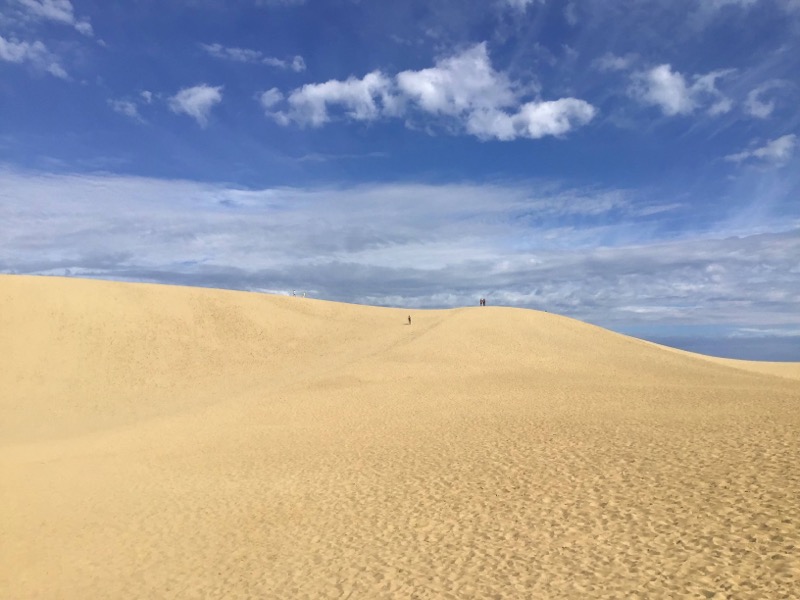 Tottori is most famous for its 1-mile wide, 9-mile long stretch of sand dunes. Who would have thought a country with a well-defined rainy season and luscious green rice fields would also have a desert?

The Tottori sankyu (sand dunes) were formed over 100,000 years ago courtesy of sediment from the Chugoku mountains deposited by the Sendaigawa River. The area’s unique features resulted in its classification in 2015 as an official UNESCO Global Geopark. After climbing up the stairs of the first sand dune, visitors are rewarded by the sight of golden-hued sand dunes set against the deep blue ocean. It’s nothing short of magical.

The Japanese exercised cleverness and humor in deciding how to make the best use of all that sand. They came up with two highly imaginative solutions: 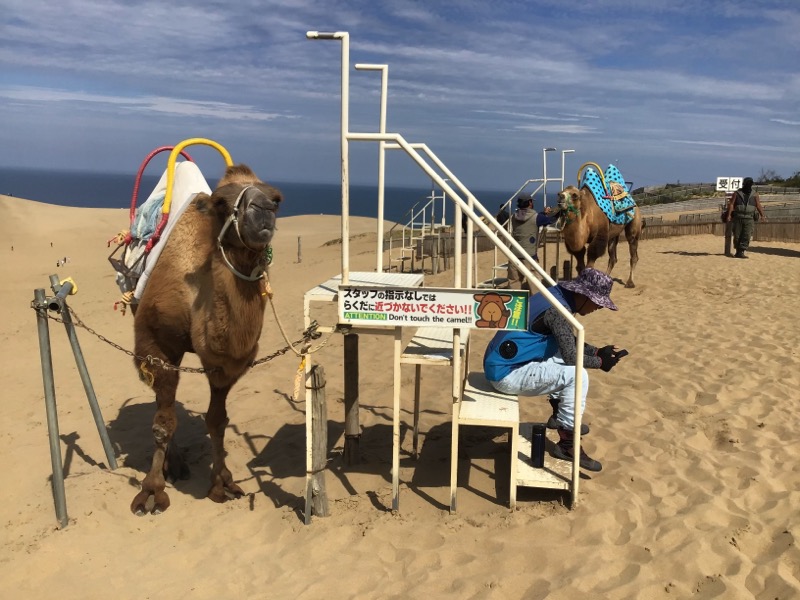 Those who have a burning and insatiable desire to ride a camel in Asia can do so in great style in Tottori. The price for the privilege varies based on the level of interaction you want to have with the camel. Simply taking a picture of (or by) the camel costs ¥100. The price to take a photo while on a stationary camel is ¥600. And if you wish to ride the camel on a designated three-minute route, the fee is ¥1500.

The Japanese are known for their devotion to cleanliness and order. The process for camel riding reflects their appreciation for structure. After paying the fee for the service you want, you are handed a color-coded ticket. It does not matter if you are the only person in line; you will still get a ticket.

After sanitizing your hands and presenting your ticket, you are directed to a clean and fine-looking camel. Those who have ridden camels in the Middle East and North Africa may be familiar with the exceptional balance a rider has to have if boarding a camel from a reclining position.

The Japanese avoid all awkwardness by keeping the camel upright and having guests mount it from a stationary elevated platform.

While Japan still currently operates under strict COVID policies, and the vast majority of Japanese still wear masks in public, exceptions are made for guests riding the camel. In recognition of the fact that camel riding is a BIG DEAL and that people love to take selfies, guests are allowed to remove their masks.

Some may be a bit disappointed that the camel follows a designated and very short route that is over in less than five minutes. However, the beauty of the environment itself and the novelty of a camel ride in Japan is such that I doubt any disappointment can last long.

Note: The camels seem strong, healthy, and well-cared for. The Japanese have very strict rules in place governing passenger weight limitations, and they further protect the camels by limiting the number of rides per day. 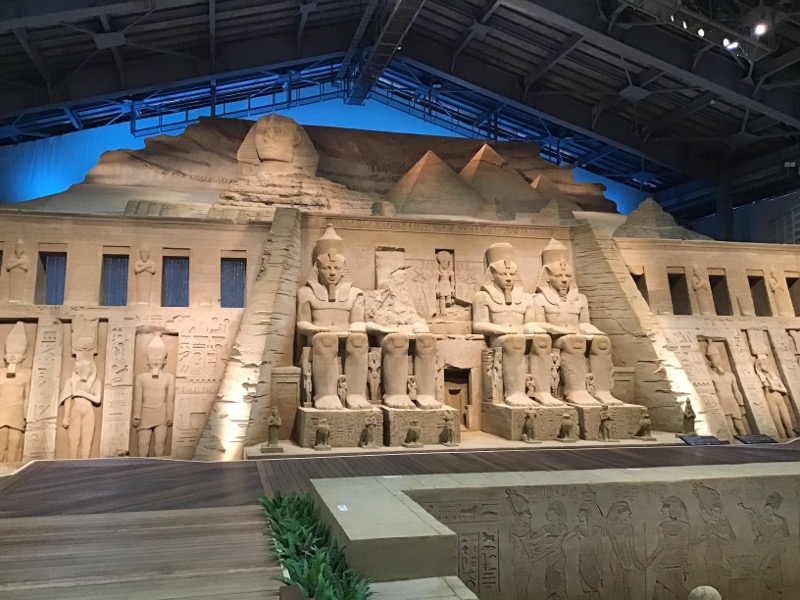 3. Travel Around the World at the Tottori Sand Museum

Japan is a nation that loves museums. Case in point – Tottori has a PEAR museum not more than five miles from the sand dunes. Given Japan’s love for exhibits and collections, it makes perfect sense they would decide to construct a facility dedicated exclusively to sand sculptures. When you’ve got it, flaunt it.

Every year, the world’s greatest sand artists are invited to Tottori to create work developed around a central theme – “Travel Around the World in Sand.” Each year’s theme focuses on a different country/region and a specific era. The countries that have previously been selected include Nordic countries, Africa, South America, Russia, the U.S., and U.K. The 2022 exhibit theme centers on scenes from ancient Egypt.

Twenty artists hailing from 11 countries created work that leaves people stunned by the highly detailed craftsmanship and by the sheer scope of the artists’ vision. Visitors can admire the painstaking work from the ground floor and see the overall effect by climbing to the third floor indoor balcony.

There is also an outdoor sand exhibit with sculptures protected from the elements by a tarp. However, the best sculptures are those that are at the indoor facility.

The Tottori Sand Museum went all in on creating an immersive experience, using digital screens, lighting, and music to create a special environment. 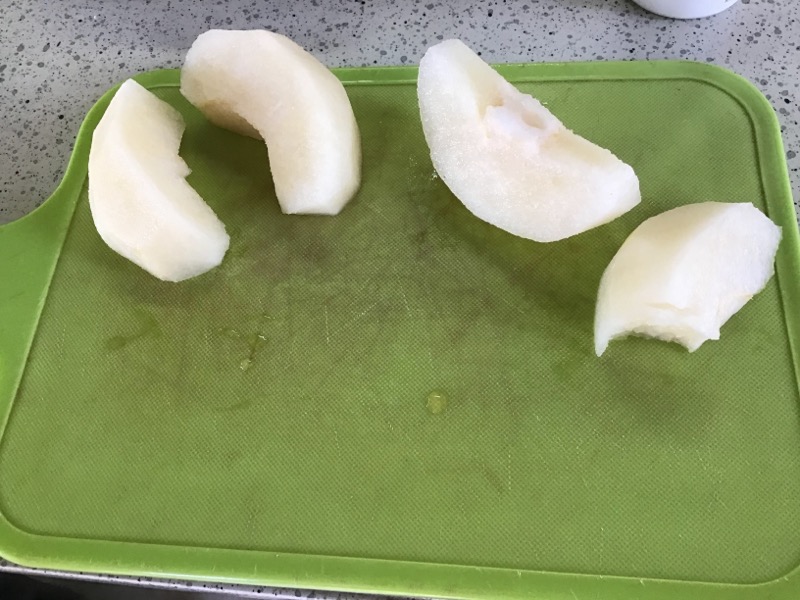 4. Sample Some of The Famous Culinary Specialties of Tottori

Tottori’s famous Matsubi snow crab is available during the winter months, from early November to early March. The crab is hauled from the deep waters of the Sea of Japan and is famous for its sweet and tasty meat.

Mid-August to November is the prime pear-picking season. Tottori produces more nashi than any other prefecture in Japan. There is literally a “Pear Road” and pear museum dedicated to the fruit. In addition to finding variations of pear in almost every pastry and dessert, visitors can pick their own fruit at local orchards.

The Japanese pears are decadent and ultra-juicy. The fruit makes for a delicious treat, whether you eat them on the spot or as a compote atop a cup of soft cream. 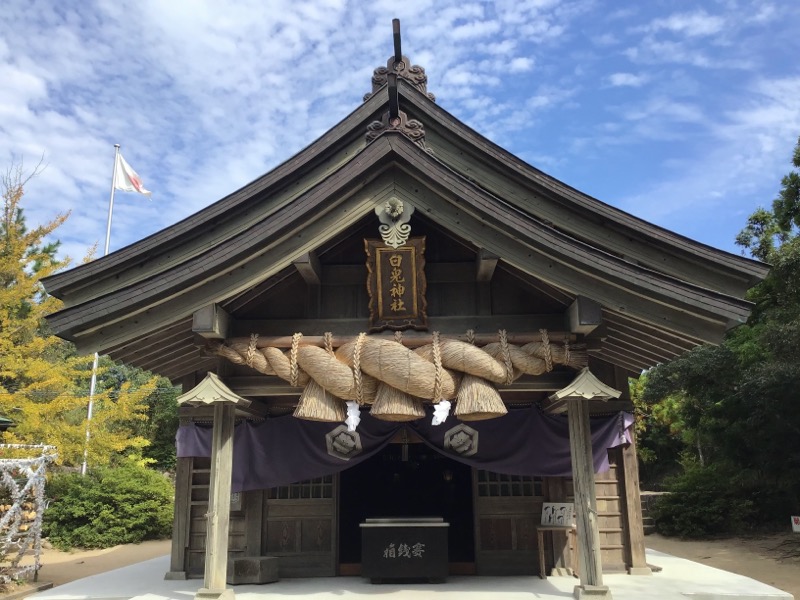 Hakuto Shrine is closely intertwined with the legend of the White Rabbit. According to the legend, a white rabbit on an island placed a bet with a group of sharks as to which species had the greater number. When the sharks assembled in a line to be counted, the white rabbit hopped across the water on their surfaced backs. Unfortunately, the rabbit made the mistake of bragging about his trick to the sharks before he was safely ashore. The infuriated sharks tore the rabbit up. 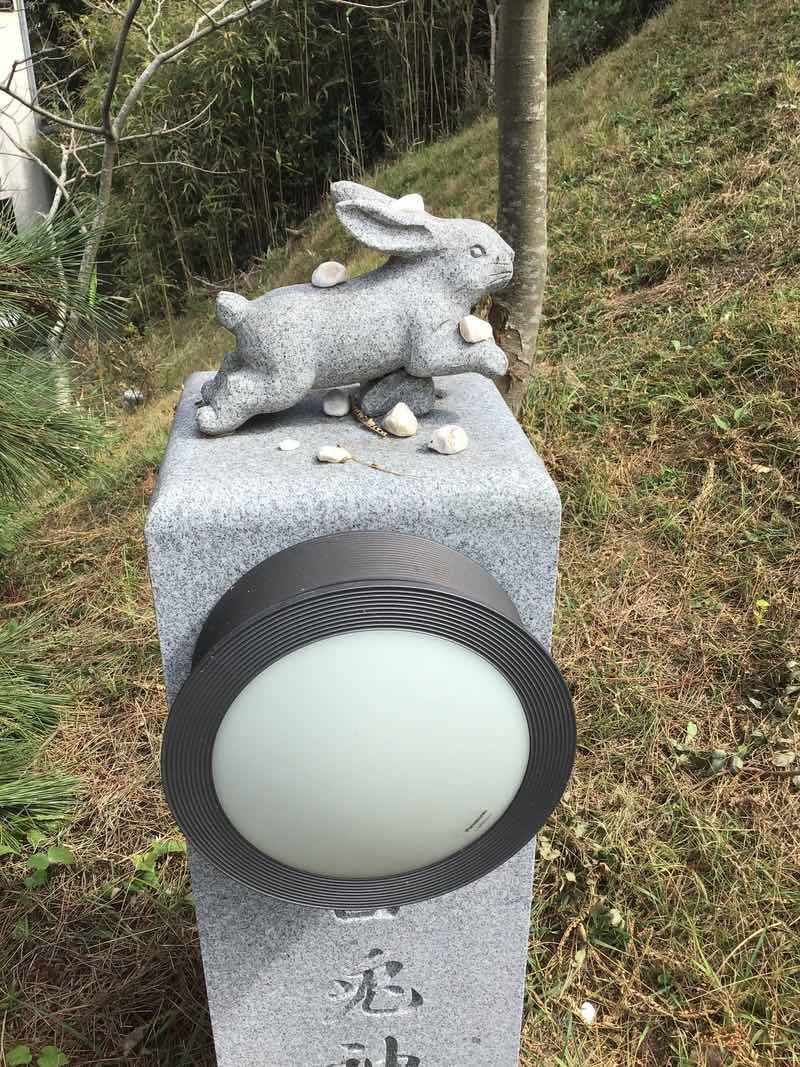 Fortunately, the white rabbit came across the god Okuninushi. The god took pity on the pitiful creature and provided instruction as to how the rabbit could restore its fur. Full of gratitude, the white rabbit gave the god a matchmaking prediction on his future wife. 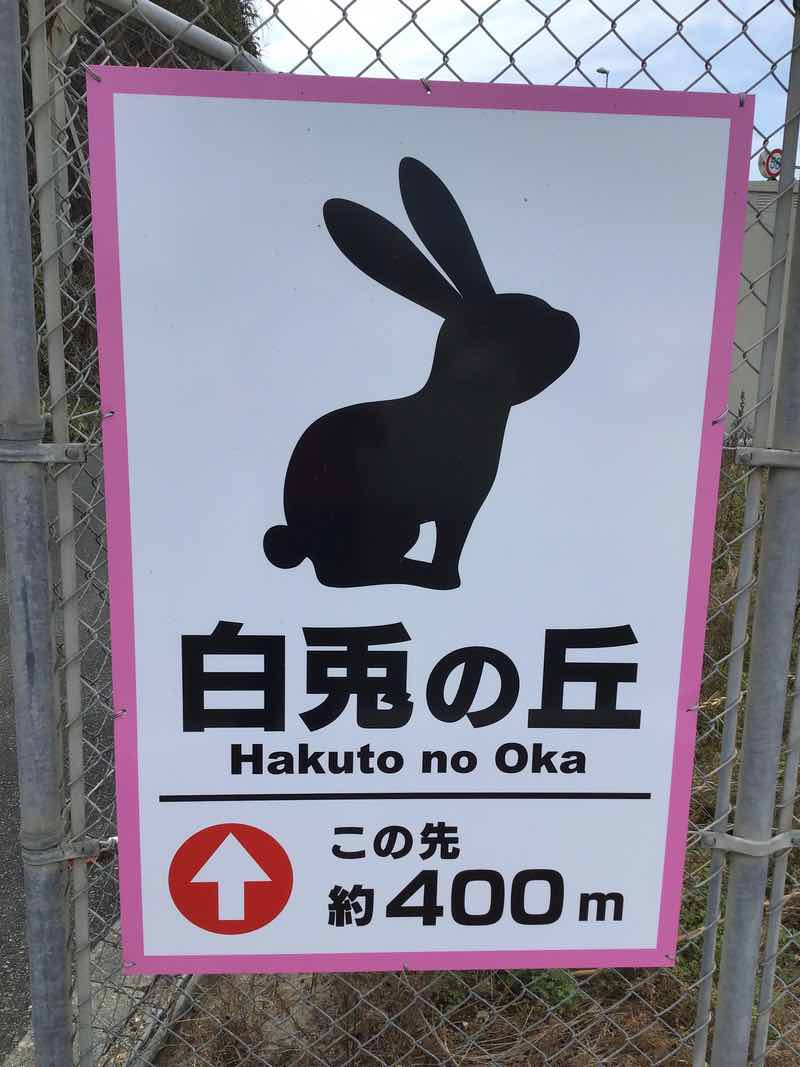 Hence, Hakuto Shrine has an abundance of rabbit statues placed on the path leading up to the shrine. Based on its association with matchmaking and love, it remains a very popular place for sweethearts and newlyweds to visit. 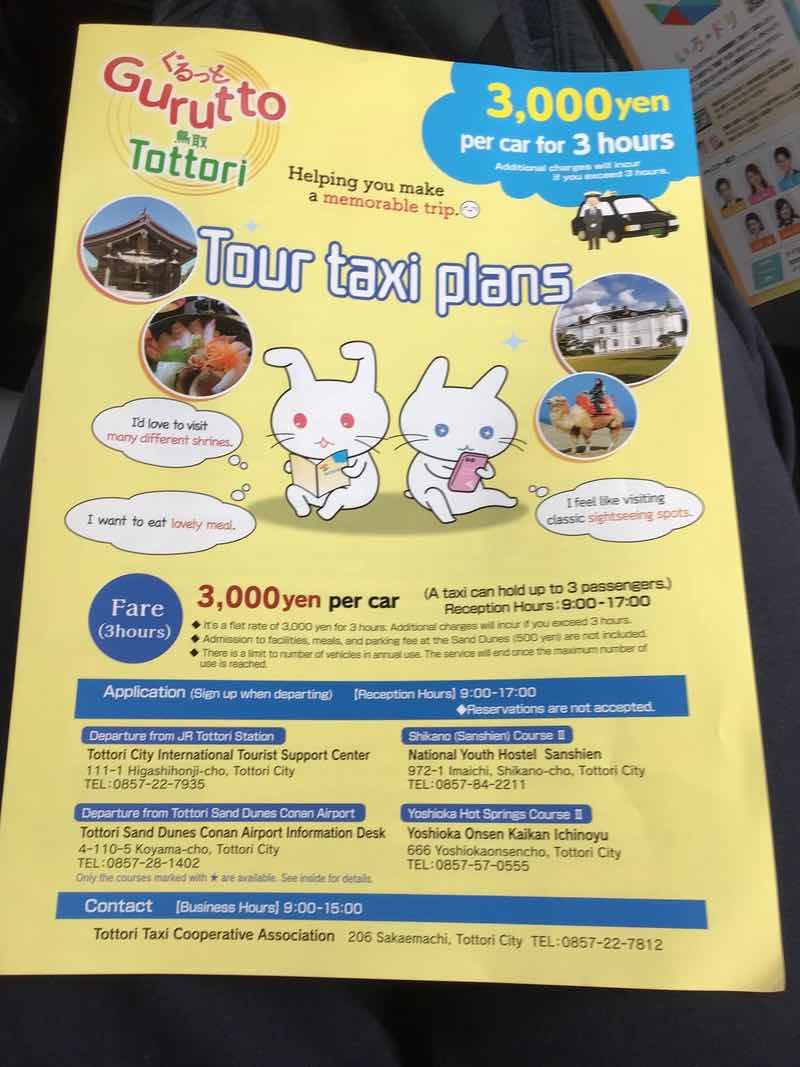 6. Travel Like a VIP in a Tottori Tourist Taxi

As a remote area of Japan, many of Tottori’s top attractions are located 10-20 minutes from central hotels. In an effort to encourage tourism, Tottori’s tourism board created a unique program called the “Tourist Taxi.”

Hearing that phrase will inadvertently leave a sour taste for some. Many travelers have had horrific experiences overseas in taxis that overcharged or where surly drivers took unnecessary routes to pad the fare.

Rest assured, Tottori’s Tourist Taxi program is the polar opposite of a scam. This is Japan.

The tourism initiative program was created under the assumption that tourists who don’t drive would have difficulty experiencing all Tottori has to offer without a car. Furthermore, public transportation to certain areas runs irregularly. Some cities would choose to shrug off the difficulties a foreigner would have getting around. Not Tottori. This prefecture wants to be seen and loved.

For ¥3000 ($20.75), foreign visitors can rent a spotless taxi – that comes with a professional accredited driver – for THREE HOURS as they visit the area’s most beloved landmarks. It’s an incredible deal.

To book a tourist taxi, simply head to the Tourist Information Center located outside the train station and choose the set route you want to take from a brochure. There are many different variations to select from, ranging from “Historical” to “Handicrafts and Arts.”

After completing a tourist registration form and voucher, one of the staff will make a call to the taxi company. A neatly attired driver arrives within minutes. The tourist staff will inform the driver of your selection, and the driver takes you to the designated places. Once the tour is complete, you pay ¥3000 directly to the driver.

BONUS Round. 6. Visit The Most Dangerous National Treasure in Japan

The physically fit and travelers craving solid jolts of adrenaline might consider a hike to Nageiredo, a Buddhist temple on Mt. Mitoku. The faithful have a 1300-year history of visiting this sacred wooden temple erected on the side of Mt. Mitoku, which is accessible only by using fixed iron chains to help navigate up the slippery rocks.

Worth noting: this particular pilgrimage is dangerous enough that you are asked to travel with another person. The Tottori Tourist Taxi does NOT (at present) go to Nageiredo. Visitors are required to wear certain footwear, and if your shoes are determined not to have the necessary traction, you may be asked to wear waraji (straw) sandals. Visits to the temple can be secured in the event the weather is bad. 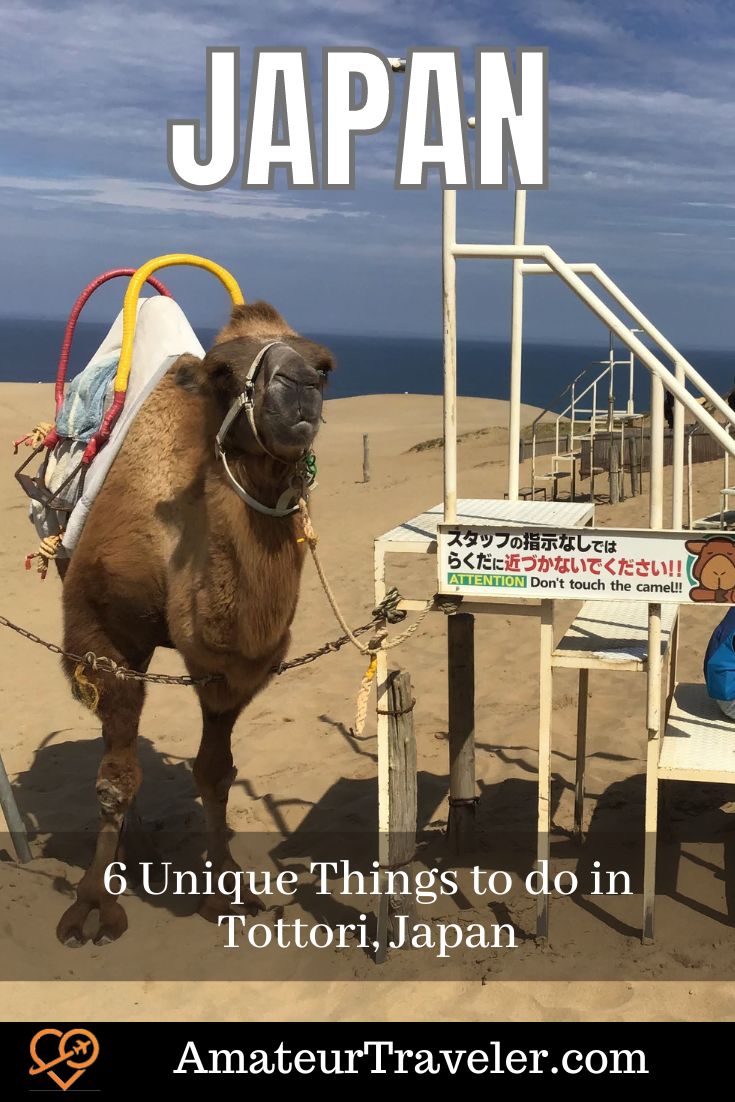 Know before you go

Those who are likely to enjoy Tottori the most are those who are looking for a break from fast-paced city life or perhaps are recovering from a temple/shrine visit overload. Traveling from Tokyo, the most populated city in the world with a population of 37 million, to Tottori was something of a shock.

While there are direct flights from Tokyo to Tottori, the journey through the different geographic areas is so beautiful that it’s worth considering traveling by rail. If traveling from Tokyo, expect a five-hour rail journey by Shinkansen and express train.

Because Tottori is a small prefecture, hotels tend to fill up very quickly on the weekends. As such, the best time to travel is during the weekdays, when clean, comfortable rooms near a train station can be booked for under $50.

Tipping is a common practice in many countries. In Japan, tipping is considered an insult, and any attempt to give a tip will likely result in confusion. If you want to express your gratitude, the best thing to do is learn a few words in Japanese and thank them sincerely.

Finally, although it is always a good idea to learn a few words in the local language, even a novice can safely get around in Tottori.

I have a strong hunch that Tottori’s straightforward, unique, and unpretentious charm is only going to continue to grow. 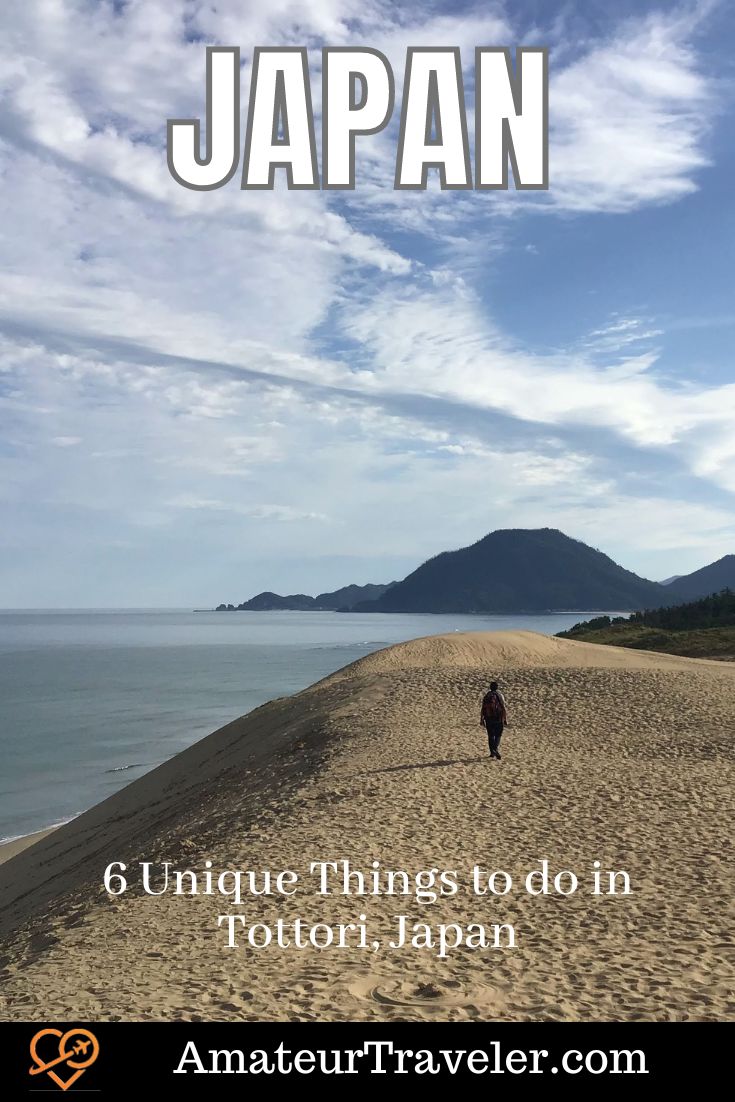