There’s one step in paying off debt that seems so obvious to me that I’ve never really considered an alternative.  However, as I read more widely in personal finance, I discovered that many people intentionally skip this important step.

The question is whether to start paying off debt immediately or to first save up an “emergency fund.”

The pure mathematics argument is that every dollar you pay off now, is a dollar you’ll never pay interest on again.  Why would you save up a bunch of money that’s earning next to nothing when you could be making progress on both principal and interest by putting all of that toward debt?

You know I love the numbers, but for me personal finance is as much about psychology as math.  While you may have to pay a little more in interest and have your debt last a little longer, there are lots of reasons having an emergency fund makes more practical sense than jumping straight into debt payoff mode with no savings at all.

Why you should start debt payoff with an emergency fund

Keep your momentum up

Tackling debt is not for the faint of heart.  It takes serious determination to stick with your goal and not give up.  Having an emergency fund allows you to handle financial emergencies that arise without derailing your entire debt payoff plan.  Being able to cover emergencies (and by that I mean real emergencies, not just splurges) means that you won’t have to incur more debt, but instead can make steady progress toward your goal.

Have peace of mind

This one is huge for me!  Knowing that we have a cushion of money available if we need it gave me a sense of security, even amidst serious debt.  I wasn’t afraid to throw every extra cent at our debt each month because I could rely on the emergency fund if a crisis were to arise.  I can’t image what my stress and anxiety levels would have been without having an emergency fund in place.  In reality, we’ve only had to actually use our emergency fund a few times, but having it available really brings peace of mind.

I don’t know about you, but our emergency fund almost feels sacred– like we will do whatever we can to avoid touching it.  If you’re like us, you’ll think of more ways to solve your financial crisis when using your precious emergency fund is the alternative.  When you have an emergency fund as your backup plan rather than a credit card, you are more likely to come up with other solutions or decide the situation isn’t really an emergency after all.  Putting an emergency expense on a credit card is way too easy because it feels more financially distant and less tangible than dipping into a sum of money you have worked hard to save up.  I can’t prove it, but I’m inclined to believe that just having an emergency fund prevents emergencies.

Unplanned expenses come up for all of us who can’t see the future.  Without an emergency fund, our only line of defense against these emergencies is a credit card.  Getting into new debt while trying to get out of old debt is terribly discouraging.  Feeling defeated leads to letting other expenses slide as “emergencies” and before long you’re worse off than when you started.  All those failures, even if they were not individually large financial blows, add up to paralyzing discouragement.

Are you convinced about having an emergency fund before tackling debt?

Are you with me?  Before you go all out and tackle your debt, are you going to save up some emergency funds?

There are essentially two ways to build an emergency fund: save more and earn more.  Or you could wait for a windfall, but I don’t advise that.  If you are expecting a tax refund, however, socking it away for true emergencies would be a great idea.

I like to start with saving money.  If you have leaks in your budget and you aren’t spending your money wisely, making more money won’t improve your money management skills.  This is precisely why I wrote Frugal Fresh Start.  Decreasing your expenses and optimizing your budget will go a long way.

How much do you need in your emergency fund?

Just to be clear, we’re talking about an emergency fund during debt payoff.  Once your debt is paid off, you will likely opt for a larger emergency fund.  A standard starting point for an emergency fund is $1,000, though for most people that is on the low side.  For anyone like us with an older car, pretty much anything that can go wrong with your car could cost you more than that.

I can’t tell you what the right number is for you.  You’ll want to consider factors like what your “emergencies” have looked like in the past and how much your normal expenses total for a month.  The size of your emergency fund will also depend on how long you expect your debt payoff to take.  If you anticipate a longer debt payoff time frame, you’ll want to have more saved.  Choose a number that you are comfortable with.  There’s no right answer.

Personally, we kept around $5,000 in our emergency fund while paying off debt.  Even though we didn’t have to worry about any housing expenses (we were living in my in-laws’ unfinished basement during our debt payoff), we both drove (and still drive) older vehicles and at the time had three to four children.

Where do you keep an emergency fund?

If you’re looking solely at the numbers, then taking time to save up an emergency fund before starting to pay off debt will result in an imperfect maximization of funds.  However, for us humans, the peace that comes with having money earmarked for emergencies is priceless. Knowing that you have money to fall back on should a large unforeseen expense arise allows you to give your all to paying off debt.  You can move forward with your payoff plan without getting sidetracked by the risk of additional debt and its degrading effects on your financial morale. 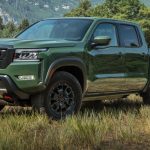 2023 Nissan Frontier gets a Midnight Edition

How to Save Money on Christmas Gift Wrapping

Can You Give Gifts from the Thrift Store?