I recently visited Hollister and San Benito County. I grew up one county over in Salinas so I have been to the area many times but it was fun seeing it again. Here are some fun things to do in San Benito County that I have known about since I was a kid or recently discovered.

Where is San Benito County?

San Benito County is just inland from Monterey County in the Coast Range Mountains. In this part of California, one set of hills further inland can be another 10 or 20 degrees warmer in the summer. The two best-known cities in San Benito County are San Juan Bautista and Hollister. Hollister should not be confused with the Hollister brand clothing which comes from some mythical surf town in California, but why they used the same name as a very much real and very much not a surf town, I have no idea.

There is only one main highway that touches San Benito County and that is Highway 101 which passes by San Juan Bautista on the way between San Francisco and Southern California. The spine of the county is Highway 25 which heads from Hollister down past the east entrance of Pinnacles National Park. The missions were started by Spanish Franciscan friar Father Junipero Serra. In more recent years there has been a lot of controversy around the history of the missions and of Father Serra. He was beatified by Pope John Paul II on September 25, 1988 and canonized by Pope Francis on September 23, 2015. To others, Serra was a villain because he or perhaps the soldiers associated with the mission oppressed the native people of the region. San Juan Bautista was founded by Father Lasuen who took over the project after Father Serra. Most of the missions have been surrounded now by urban life but the town square around San Juan Bautista was preserved in addition to the mission. In the town plaza you will find a hotel, livery stable, old jail, and plaza hall. The livery stable holds of collection of old carriages and wagons.

If the mission looks familiar it might be because you, like me, came here on a field trip as a kid. But more likely you recognize it from the 1958 Hitchcock film Vertigo.

If you take your kids to see the mission make sure to look to your right as you face the mission. The steep slope immediately to the mission’s right is the San Andreas Fault. Needless to say, the mission has been damaged by earthquakes over the years but its thick adobe walls still stand.

Fremont Peak State Park is a great place to visit in California. Whether you’re a nature enthusiast or one who prefers a peaceful day hike, Fremont Peak will not disappoint. From the 3800-foot peak, you can take in stunning views of the Salinas Valley as far as the eye can see. Fremont Peak offers some great trails for easy-to-moderate levels of hiking with plenty of sights along the way. The peak is named after “The Pathfinder” John C. Frémont who was an American explorer and also the first Republican who ran for the president.

If you happen to like astronomy, Fremont Peak has its own astronomical observatory. The observatory has a program each Saturday night from April 1 to October 31 when the sky has a moon that is 50% full or less.

I remember camping at the Valley View Campground with Boy Scouts quite a few years ago. It is common for the Salinas Valley to fill up with fog at night and when we awoke we were above the clouds with a sea of clouds in every direction. Of course, that fog keeps helps insulate the valley and up on the peak, it was quite cold in the morning.

My favorite hike in the eastern half of the park, both now and when I was a child, is the hike to Bear Gulch Reservoir. There are two routes. The Bear Gulch Cave Trail is a short, interesting hike with beautiful boulder-filled narrow gorges where the boulders have formed a cave. You will need to bring a flashlight to navigate through the caves. This 1.5-mile hike has a 275 elevation change.

The other route is the Moses Spring Trail provides which avoids the caves and might be better for those with a fear of the dark or small spaces or with mobility issues. I recommend doing both trails, hiking the Bear Gulch Cave Trail up and taking the easier Moses Spring Trail back. There are other hikes that can be joined at the Bear Gulch Reservoir for the more ambitious.

Pinnacles has one campground located at its East entrance, with tent-only and RV hook-up sites for those who want to stay awhile. 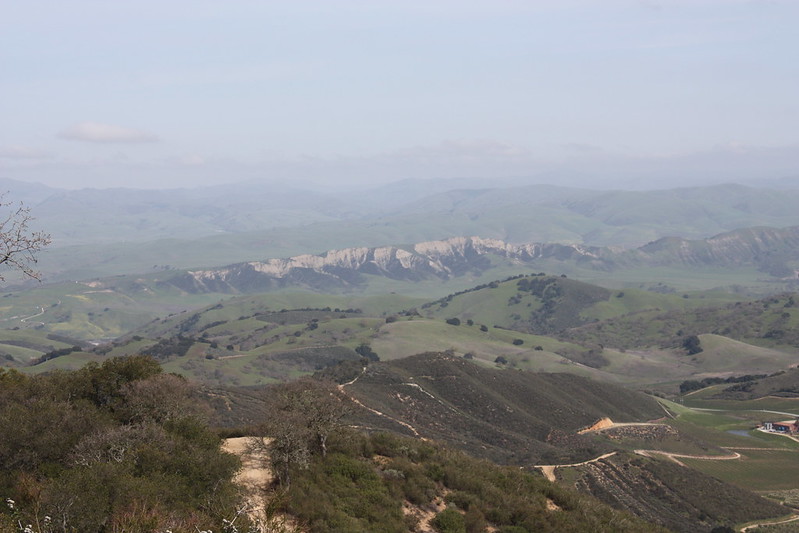 There are 4 main areas of the park. The Mudstone Ranch area is 850 acres and 13 miles of trails set aside for hiking, biking, and horseback riding. The area does have grazing cattle so give them some space and watch for electric fences.

The Lower Ranch allows ATVs and motorcycles. This is the area where the park offers safety training, nature hikes, and school programs. This area of the park is 3,300 acres and includes a Grand Prix Track.

The Upper Ranch has 24 miles of trails for 4×4 vehicles including a 4×4 obstacle course. The 3rd area is Hudner Ranch which is on the other side of the San Andreas Fault from the Upper Ranch. It has 30 miles of trails. Some of these trails are narrow and are recommended for shorter vehicles. This area has rolling hills with beautiful views. There are 2 remote campsites in Hudner Ranch.

South of Hollister is an area that is known as the Cienega Valley. It is sheltered from the cool fog of the coast by the Gabalan Range of mountains and the hot Central Valley by the Diablo Mountains. While Cienega does not have the name recognition of some of California’s other wine regions, this small valley has had grapes grown here since the 1800s. When you are in Downtown Hollister you are only 15 minutes from the nearest vineyard.

DeRose Vineyards has 100 acres of vineyards, including 40 planted before 1900, and boasts one of California’s longest growing seasons. French immigrant Theophile Vaché first planted grapes on the property in 1854. The property’s combination of old vines, topography, geology, and cultural practices helps define its terroir, the site-specific growing conditions that impart unique characteristics to a wine.

Winemaker Pat DeRose works year-round to achieve optimum vine balance, beginning with winter pruning and later with careful leaf removal throughout the growing season. The property’s principal grape varieties include Zinfandel, Negrette, Viognier, and Cabernet Franc. The Zinfandel vines were originally planted in the late 1890s and grow in a variety of soil types, including a rocky mixture created by the San Andreas Fault. The Negrette vines are 115 years old and are even rare in their native France. The Viognier vines were planted before 1900 and are dry-farmed on terraced hillsides. The Cabernet franc vines, which thrive on the DeRose estate, are trained on bilateral trellising and average 3.5 tons per acre.

DeRose has a lovely outside tasting area and a more industrial interior tasting room. We visited on a rainy day when the outside tasting area was closed. The tasting cost $15 for 3 wines from a list of 9 available. DeRose is making their reds available for tasting a year or two earlier than the other local wineries that I usually visit so if you buy a bottle I would recommend keeping it in your wine fridge for a bit before drinking it.

DeRose has a Nostalgia Car Museum including the only permanent display of Graham-Paiges in the World. The museum closed during Covid and has not yet reopened. One would assume that the cars in the museum are in better shape than a couple of the rusted cars on the vineyard grounds.

Eden Rift Vineyards is a well-known and highly regarded winery located in the Cienega Valley of California. The 120-acre estate was established in 1849 by Theophile Vache, making it the oldest continuously producing vineyard in the state. The winery is located in an area with rich, limestone-filled soils that have proved ideal for the cultivation of a variety of grape varieties, particularly Pinot Noir and Chardonnay. In recent years, the winery has been revitalized by Christian Pillsbury, who brought on a team of young industry professionals, including winemaker Cory Waller, to create some of California’s most vibrant and energetic Pinot Noir and Chardonnay.

Eden Rift is a beautiful vineyard and is popular for group events. They have the unusual offerings of an ATV tour and tasting and a helicopter tour and tasting that you can book through their website. Reservations are recommended for tastings.

Running Rooster offers a wide range of menu items to suit all tastes. The restaurant started as a take-out only restaurant in 2003. Their award-winning burger is a customer favorite, and they also have a selection of wood-oven pizzas on offer. For those looking for something a little lighter, there are a number of savory salads to choose from. I would recommend getting something with chicken. I had the Chipotle Chicken Sandwich and my wife had the pear and apple salad with grilled chicken. If you like spicey, get the outlaw fries instead of the regular fries, yum.

In addition to the delicious food, the Running Rooster also offers a range of cocktails, draft beers, and local wines to pair with your meal.

The restaurant has a comfortable and casual atmosphere and great service. If you want to come and watch the game they have a bar set up for just that. They have an outdoor dining space but it was closed the day we were there because of rain.

Mangia Restaurant in Hollister, California has been serving up genuine Italian dishes since 2016. Don’t let its strip mall location and vibe put you off. Owner Raul Escareno puts his own spin on classic Italian recipes handed down from his Grandma. His menu features tender homemade pastas, freshly made sauces and salads, and flavorful appetizers. Dine with the comforting atmosphere at Mangia’s for a delightful experience that helps you and your family feel right at home. Whether you’re looking for an authentic Italian meal or their unique Mexican fusion like chile verde pasta, you won’t be disappointed with a visit to Mangia.

I ordered Mama’s Favorite which is sauteed onions, peppers, and sausage in a spicy marinara tossed over penne pasta. My wife had her usual pasta carbonara. Both dishes were unusually good.

Our recent trip to Hollister in San Benito County was fairly spontaneous. We had some Marriott points that we used for a free night at the Fairfield by Marriott. But like so many other areas in my home state I enjoyed revisiting this area and exploring this less visited part of California. I think you will as well.

New Technology In Learning: The Impact Of AI On Student Life And Grades

What Does The Style Of Writing Say About The Student: What Is The Value Of Knowing Basic Skills?