It was 1956 when brothers Lee and Glen Miner opened Miner’s Ace Hardware and Wally Lewis became their first employee. After 66 years of loyal service to the company, Lewis retired at 95 years old. Miner’s Ace Hardware now has nine locations in central California, with Lewis building his career at the original location in Grover Beach, California. He started as a jack-of-all-trades, and eventually began specializing in hardware at the store. But no matter his role, you could always find him on the salesfloor helping customers. 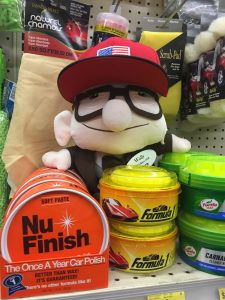 “Miner’s is still family-owned, and I think this really means something,” Lewis says. “It has been a good place to work. The customers are nice, and it’s always fun when somebody comes in with a home repair problem and we are able to fix it.”

Even though he won’t don his red apron anymore, Lewis will still be in every Miner’s Ace Hardware store; he has been immortalized into a stuffed toy that kids can hunt for in the store and win a Wally pop when they find him.

“Now, more than ever with all of the staffing shortages and massive turnover rates, this heartwarming story of loyalty and Wally’s commitment to the company hopefully lifts peoples spirits,” says Laurel Cadena, marketing director for Miner’s Ace Hardware. “Wally has left a legacy, and he will be greatly missed by all of us.”

Ward Lumber has earned a historic honor, joining the New York State Historic Business Preservation Registry. At a ceremony in May, New York Senator Dan Stec presented CEO Jay Ward and his staff with the official state certificate, recognizing Ward Lumber as one of the first 100 businesses selected for the designation.

Ward Lumber has locations in Jay and Malone, New York, and has been supplying building supplies to the AuSable Valley of the Adirondack Mountains for 132 years.

“After four generations of Ward family ownership, I’m privileged to continue to lead Ward Lumber now as CEO into the next chapter of our long history as a worker-owned cooperative,” Ward says. “The goal is that Ward Lumber will carry on for at least another 130 years.”

Stec says Ward Lumber has been a cornerstone business in the region since 1890. The online registry was established to honor New York businesses like Ward Lumber that have been in operation for at least 50 years and have contributed to their community’s history.

“Between its rare status as a worker-owned cooperative and its history of volunteerism and contributions to the towns of Jay and Malone, Ward Lumber is very deserving of this honor,” Stec says.

JoLene and Ryan Rust have owned Rust’s Hardware Hank for 23 years, and during that time have felt the love and support of their community many times over. The couple has three kids, and when they have had to shut down the store early for football games or other kids’ activities, JoLene says their customers have been understanding.

Most recently, the store was closed for part of the day so the Rusts could see their youngest son, Reagan, off to Advanced Individual Training (AIT) for the U.S. Army. Reagan joined the North Dakota National Guard in his junior year of high school.

“Our community support is awesome. The community has watched all our kids grow up in the store,” JoLene says. “When we had to close for part of the day to send Reagan off to AIT, our customers were understanding and supportive.”

Customers Treated to a Mini Zoo

When it comes to store pets, Crest Hardware in Brooklyn, New York, has two unusual animals. The store is home to an African Grey parrot named Finlay, who lives in the greenhouse, and a miniature potbellied pig named Franklin, who calls a pen in the back of the store his home from time to time. Along with visiting with these fun “employees,” fans of Finlay and Franklin can purchase pins, magnets and other merchandise with their favorite store pets’ faces.

Engage with Your Customers

Have an idea? Send an email to have your story considered for publication.