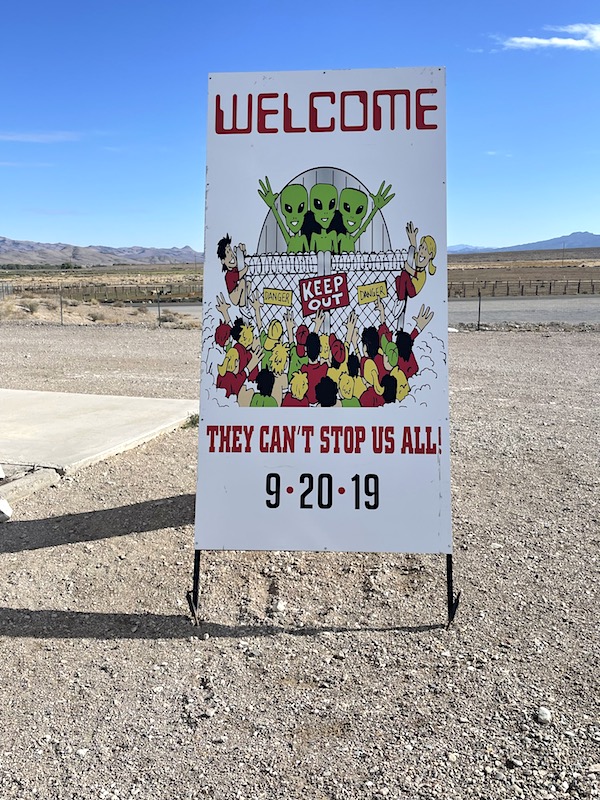 Every time I visit Las Vegas, I search for a new and unique day trip away from the city. So, when I saw an excursion that advertised a secret government base, extraterrestrials, and UFO hunters, I decided to take a closer look. I don’t think too much about UFOs in my daily life. I’m aware that there are people who are fanatical about searching for them, and I do remember that there were times when I was growing up when public interest in UFOs was very popular. I know some of the mythical lore regarding Area 51 in the United States, but I have never deeply investigated it.

This tour was scheduled to visit secret airplanes, two entrance gates to Area 51, a salt flat associated with UFOs, the Little A’Le’Inn in Rachel, Nevada, a mysterious black mailbox, and an Alien Research Center. Even in Vegas, this got my attention!

Our small group of curiosity seekers began our journey with a visit to McCarran International Airport in Las Vegas. Janet Airlines is the name given to a fleet of classified airplanes that regularly fly military and contract workers to Area 51 and other military bases in southern California. There is a degree of secrecy regarding this airline and the workers who regularly use it. We were hoping to get a glimpse of one of the mysterious airplanes. Amazingly, with the help of our tour guide, Art, we did spot a few parked on the tarmac at McCarran. We didn’t know where they were going or who was using them, but Art’s stories about the mysterious airline deepened our interest in visiting the Area 51 region. This was an exciting start to what would be a day of travel to unusual sites. 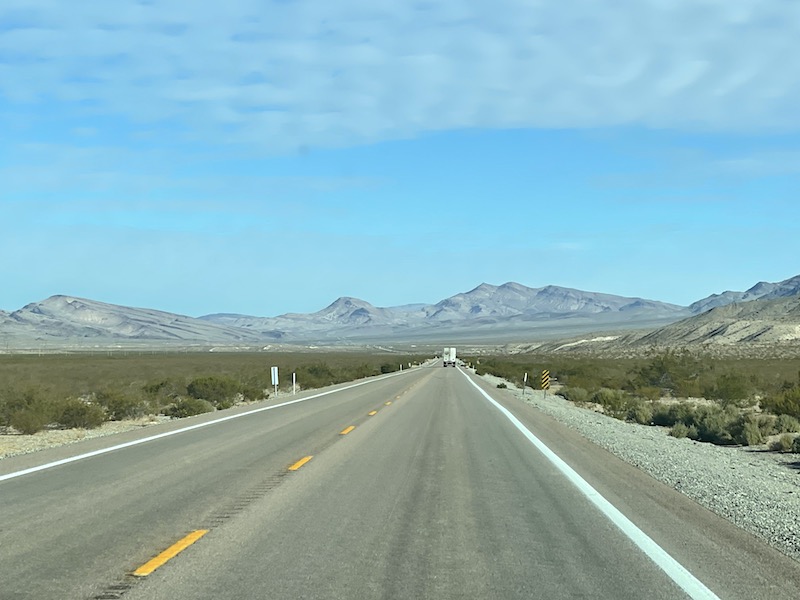 The actual journey to Area 51 took us north of Las Vegas by way of Interstate 15 to Nevada State Road 93 and then more remote terrain. As we drove further away from the city, towns and homes were fewer and far between. Our drive led us to the Great Basin desert, which was so desolate that the only sign of civilization was the thin ribbon of highway before us. After a brief stop at a combination gas station, fast food restaurant, and grocery store in Alamo, Nevada, we headed further northwest to State Road 375, also known as the Extraterrestrial Highway.

We were warned that the drive to the Area 51 region would take a couple of hours, so we settled back, talked about ourselves, and shared some stories. I had the fortune to be sitting in the seat to the right of the driver, so I enjoyed the beautiful scenery unfolding before me. Since we continually rose in elevation, the starkness of the desert and rising mountains were amazingly beautiful. When we finally reached the area around Rachel, Nevada, we were ready to begin unraveling the mysteries of the region. Curiously, what we saw was a series of unusual sites that may or may not have been related to each other. Overall it was informative, interesting, somewhat puzzling, but genuinely fun.

Rachel, Nevada, is a small, isolated town of around 50 people that is mostly comprised of trailer homes, a small gas station, a general store, an RV park, and the Little A’Le’Inn bar/restaurant. There was not much else there. It obtained notoriety mostly from UFO hunters, aviation enthusiasts, and people interested in secret government military bases.

There are several unpaved roads near Rachel that lead to entrance gates for Area 51. When interest in unusual flying aircraft began to grow in the 1990s, people who were interested in the UFO phenomena began to visit Rachel since it was the closest public city to this area. 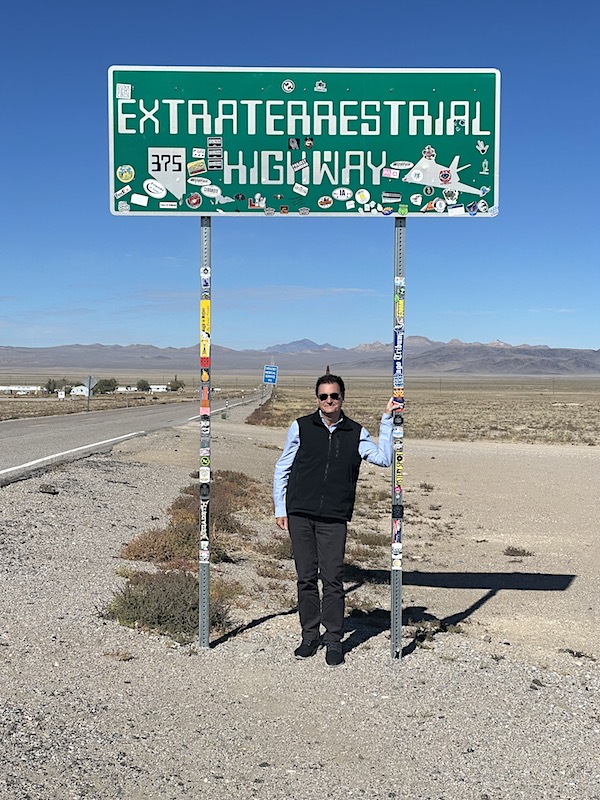 The Nevada Commission on Tourism decided to take advantage of this newfound interest in paranormal activity and, in 1996 designated State Road 375 as The Extraterrestrial Highway. They hoped that the mystique of renaming the road would draw travelers to this remote region who were interested in old atomic bomb test sites, mysterious military air bases, and possible UFO activity. The tourism promotion didn’t catch on. Today, roughly about 200 vehicles pass through this area each day. As we neared Rachel, we made a stop to take photographs by the Extraterrestrial Highway sign. As expected, we saw little to no traffic.

Area 51 is a secret United States Air Force military installation located near the Groom Lake salt flat in southern Nevada. The installation’s claim to fame is that it has been associated with several conspiracy theories about extraterrestrial life. Officially, it’s known as a flight-testing facility. Through the 1990s, legends about Area 51, strange-looking aircraft, and possible alien activity began to emerge from the region around State Road 375. 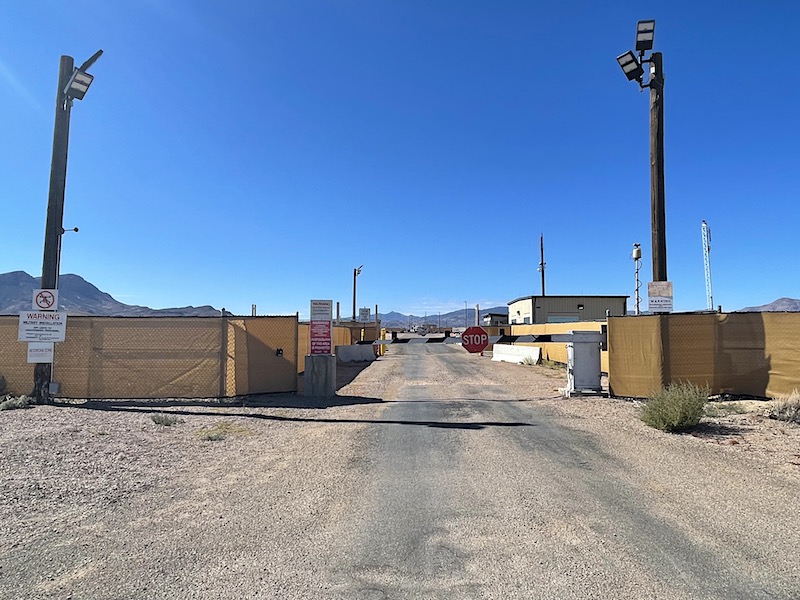 Area 51 covers a large territory and is not easy to view and access. There are some entrance gates, but they are along unmarked remote gravel-covered roads and appear to be used mainly for deliveries. Most workers arrive by airplane. We traveled to one of the Entrance Gates to Area 51 near the town of Rachel. I didn’t know what to expect and was surprised that the gate we visited did not look overly fortified for a top-secret government base. There were some intimidating signs, but overall the barriers were not that extensive. 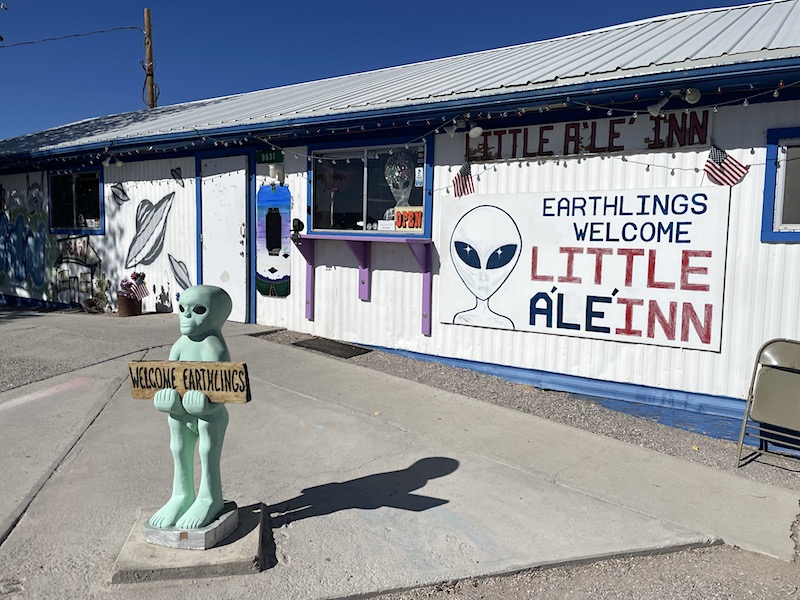 For lunch, we stopped at the Little A’Le’Inn in the town of Rachel. The combination restaurant/bar has been featured in various Area 51 documentaries and movies such as “Independence Day.” Since some of the scenes from the movie were filmed near the Inn, in 1996 the producers presented the town with a time capsule that is located near the front of the Inn. 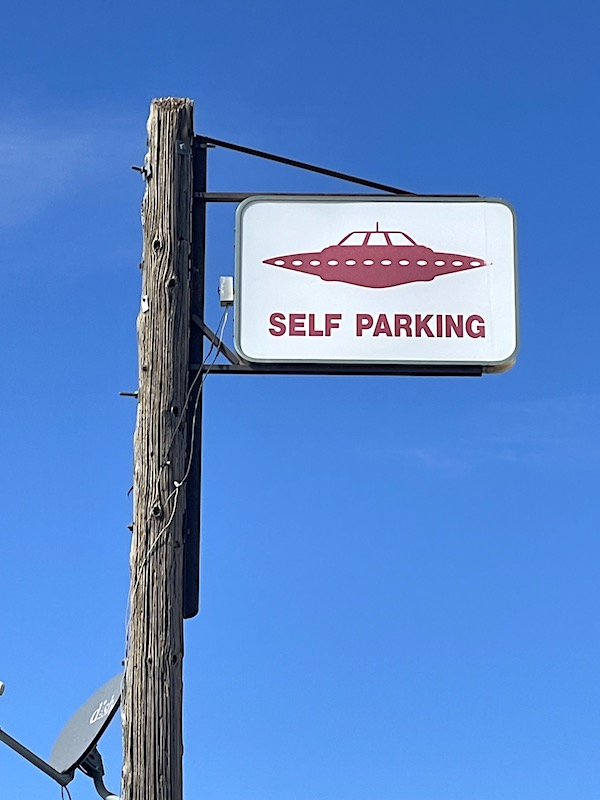 There were all kinds of memorabilia inside the building, many photographs about various UFO sightings, and Area 51 souvenirs. Some locals were hanging out at the bar, and overall it was a lively, quirky place. The people who worked there joked with the visitors and added a lot of atmosphere to the experience. For lunch, I had their famous A’Le’Inn Burger. It tasted great, and I would recommend that if you pass by this area, do stop in for lunch. It is also worth noting that you won’t find anywhere else to eat for hours. 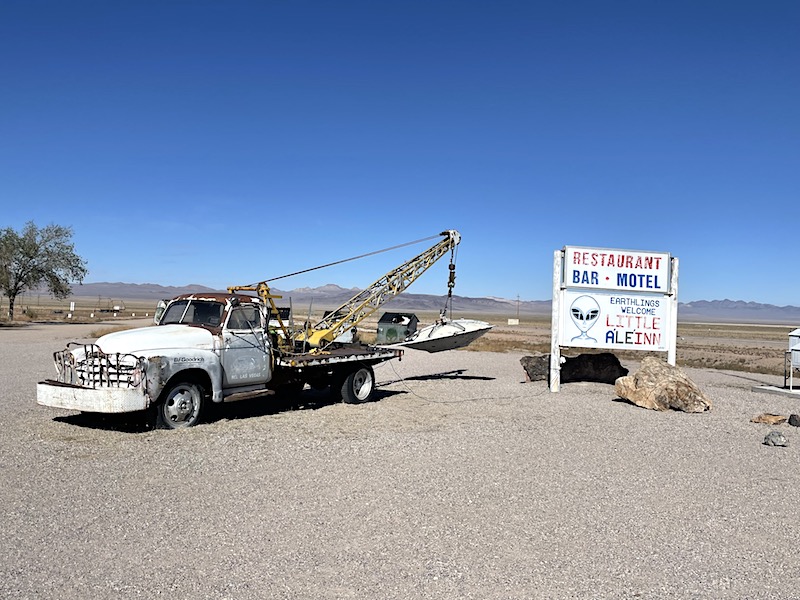 After a relaxing lunch, we went to a nearby dry salt flat lakebed similar to Groom Lake at Area 51. Local stories in Rachel often associate UFO sightings with these nearby salt flats. I have heard about salt flats, but this was the first time I walked on one and saw it in person. Interestingly, when we drove out onto the salt flat, we had to place an orange road cone so that we would know where to return. 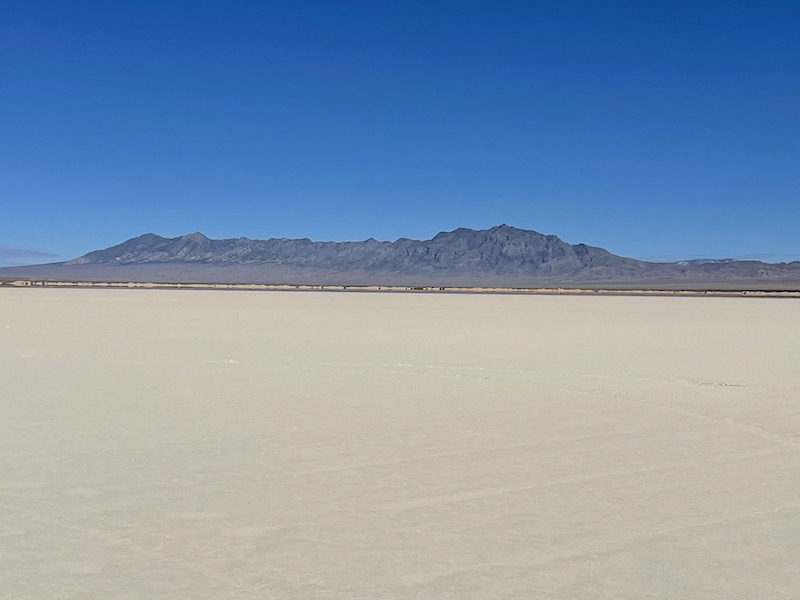 It was amazingly flat and had a solid, hard surface. In the middle of the dry lakebed, everything looked similar. It was very disorienting, and it would have been difficult to find our exit without the marker. I found all these new experiences much more interesting than I originally expected. 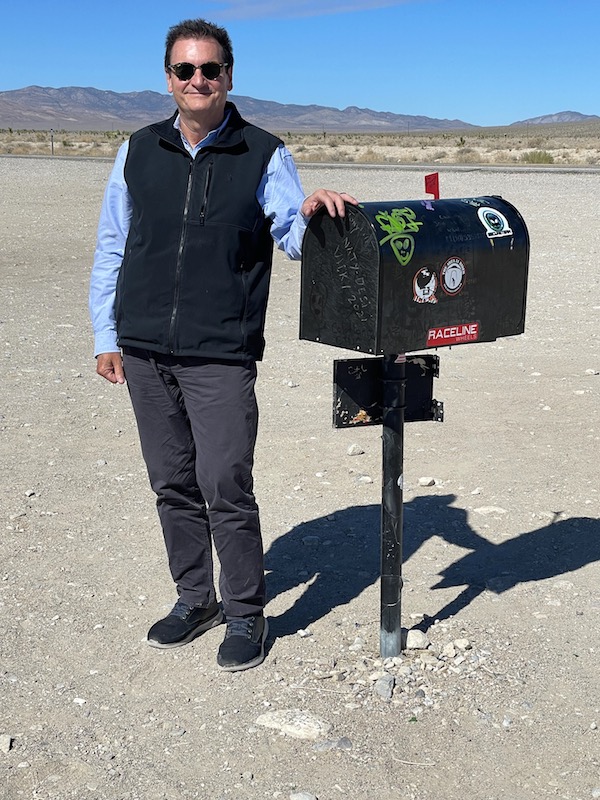 Not far from the town of Rachel on State Road 375, we visited a mysterious black mailbox. What makes this mailbox unusual is that there are no mailboxes for miles and miles along this stretch of the highway except for this one lone mailbox. The black mailbox, which most likely belongs to a nearby rancher, became famous as a meeting place for UFO enthusiasts. Even more mysterious is that the mailbox often disappears for days and then reappears.

It was there on the day we visited and was covered in stickers. The mailbox was not locked, so we looked inside and found notebooks and other documents. I paged through the notebooks, but nothing seemed to make much sense to me. It was a great photo stop. 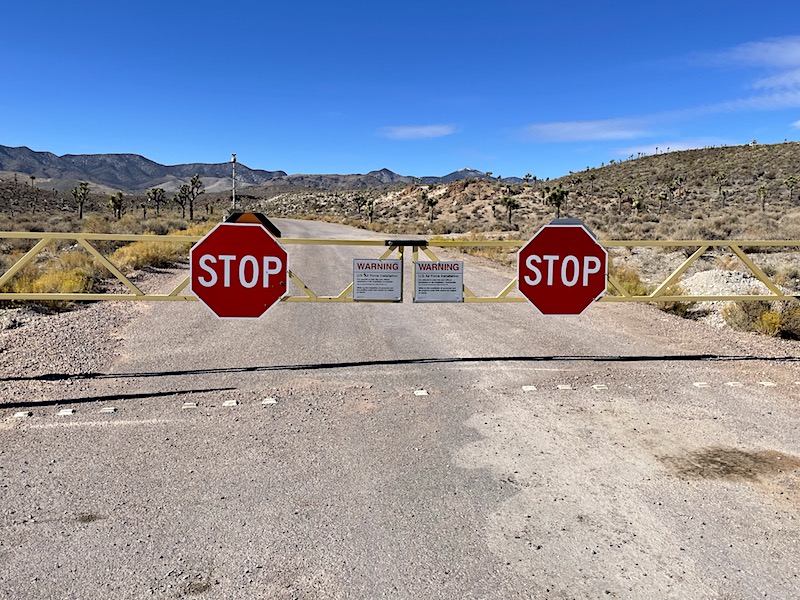 After a short drive, we visited a second entrance to Area 51. This location was made famous by the Storm Area 51 campaign. On September 19, 2019, a small group of UFO enthusiasts organized an attempt to storm both Area 51 gates near Rachel. The activists were seeking to find out what was going on inside Area 51, but no one was successful in entering the facility. 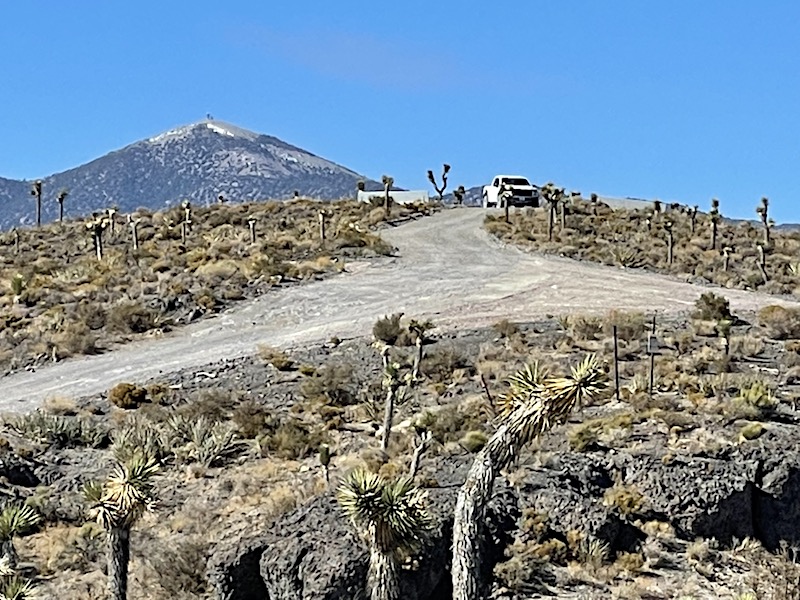 The result of this event was that the military constructed more barriers at the entrances. To me, this second entrance still did not appear to be overly defensive. There was a mysterious SUV parked on a nearby hill. The guards who occupy these vehicles are often referred to as the Men in Black. I’m sure we were being watched, but I doubt that we were deemed much of a threat. On our way in, we passed a truck carrying some machinery for delivery. The truck parked behind us, and we were told by our guide that the gate would not open for the delivery while we were there. This definitely added a little mystery to our expedition. 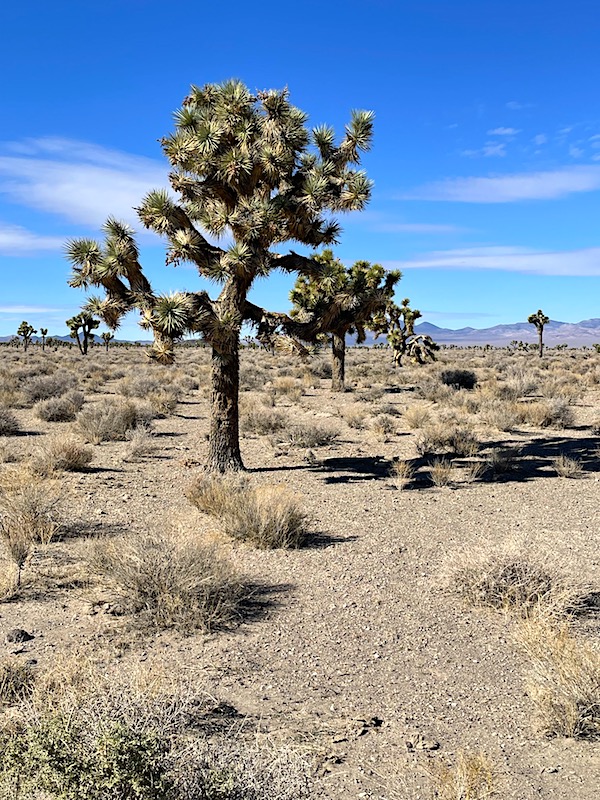 On the way out, we stopped to view some desert vegetation and take photographs of Joshua Trees. An hour later, we stopped at the Alien Research Center near Alamo, Nevada, which advertised itself as a clearing house for everything Area 51, UFO, Paranormal, and Military. To me, it seemed more like a souvenir store for t-shirts and other UFO paraphernalia. It was housed in an old Quonset hut and had a large alien sculpture out front. One exciting event that occurred at the Alien Research Center was being buzzed by fighter jets flying in and around the valley. It was exciting trying to spot the jets as they zoomed down and flew overhead multiple times. 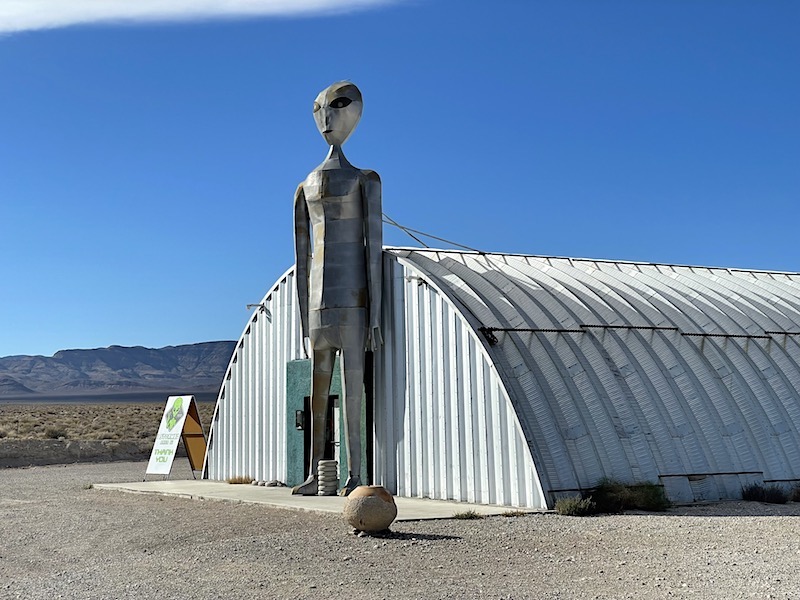 The long ride back was a time to share stories and learn that most of the ideas and preconceptions we had about Area 51 were probably mythical. I imagined that an area as isolated as the one we visited might easily become a breeding ground for all kinds of mysterious stories. The addition of secret government military bases and immense open star-filled skies could provide much fodder for all kinds of imaginative experiences. 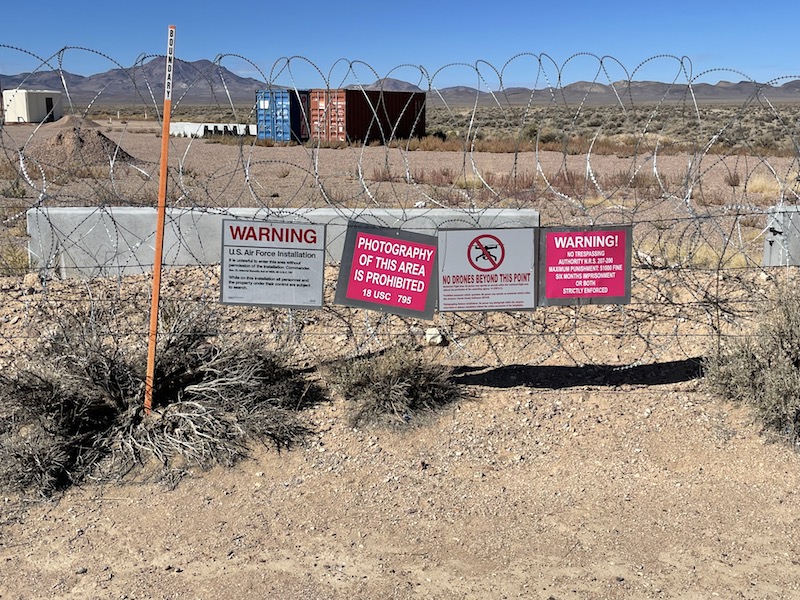 Overall, I was very pleased with my daylong journey and would recommend it to anyone interested in learning factual information about Area 51 and this remote area of Nevada. Sadly, I did not see any extraterrestrials or UFOs, nor did I find out what was going on at Area 51. I didn’t expect that I would. Truthfully, my best memories were not of the supernatural but of the breathtaking scenery of the high Nevada desert. The images of endless desert, tall mountains, dry salt lakebeds, and wide-open skies are ones that I will always remember. 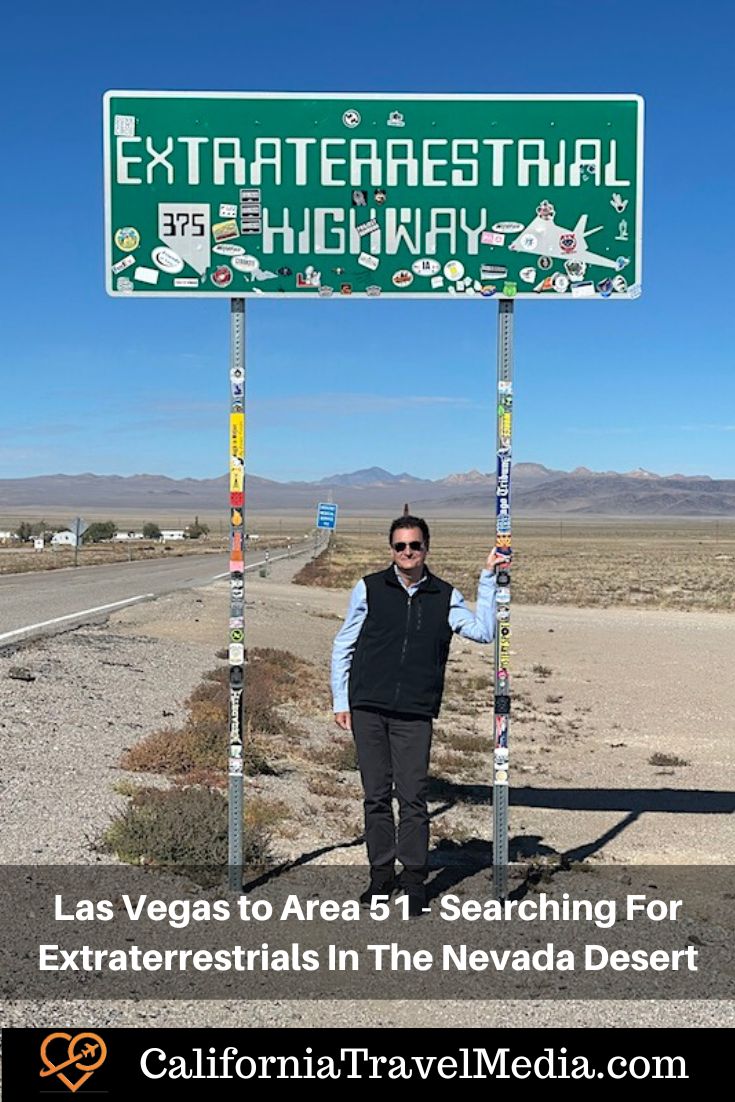 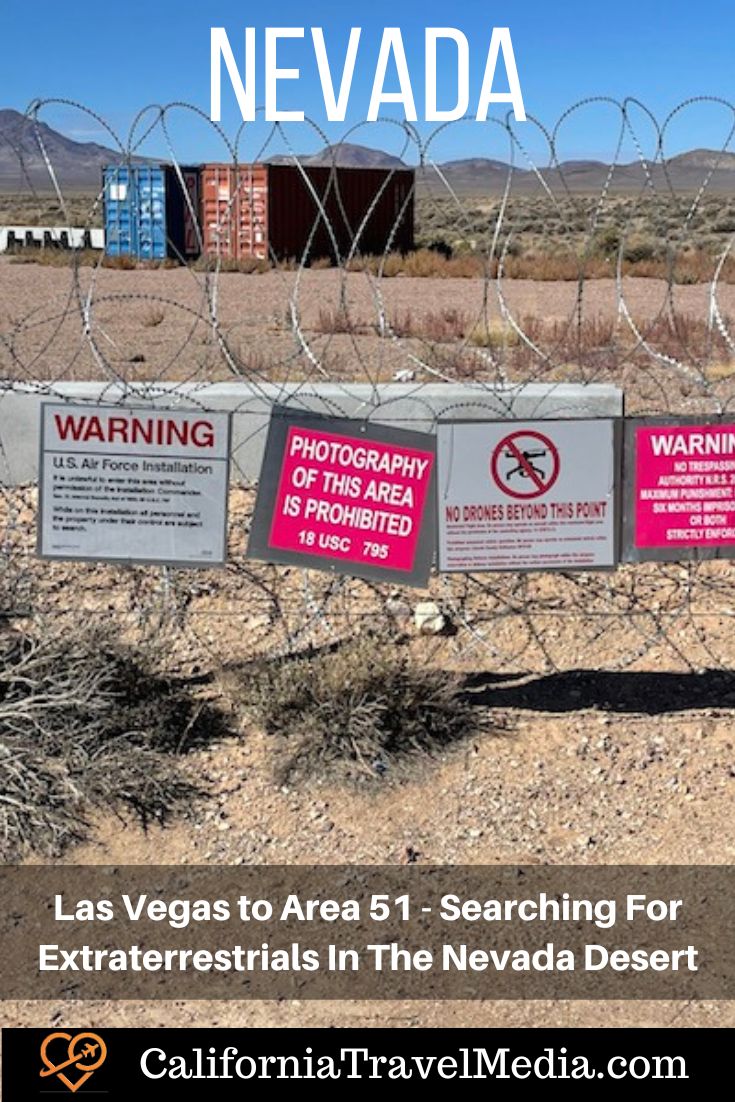 Should Bitcoin Follow Ethereum To Operate On PoS Consensus?