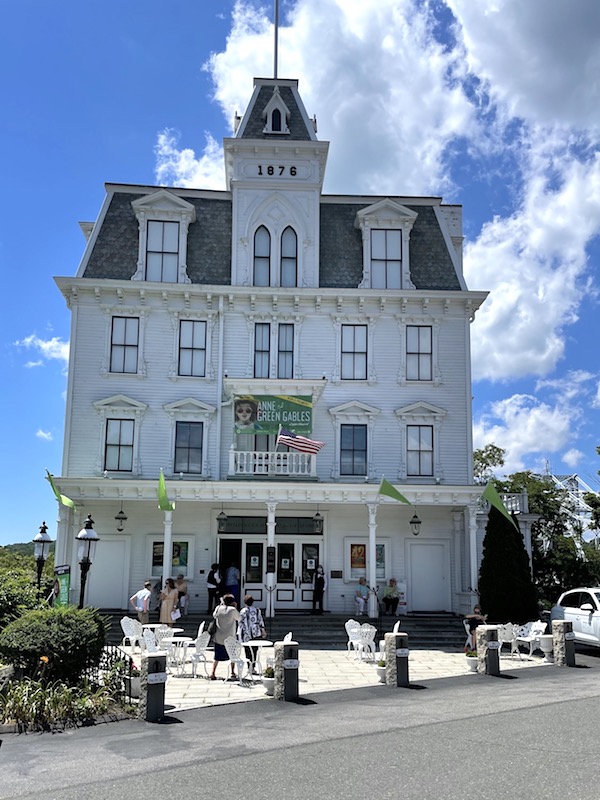 Back in 1977, I had the opportunity to see the famous musical theater production, Annie, soon after it opened on Broadway.  Part of the lure of the show was that it first premiered at a small theater called the Goodspeed Opera House in East Haddam, Connecticut, where it was panned by local critics.  My curiosity was piqued, so I researched the Opera House and found incredibly scenic photographs of an iconic four-story mid-1800s structure standing majestically along the Connecticut River.  At that time, I thought that a road trip to see a performance at the Opera House would be an incredible experience.  It took me 45 years, but I finally made it there, and the experience was nothing less than amazing. 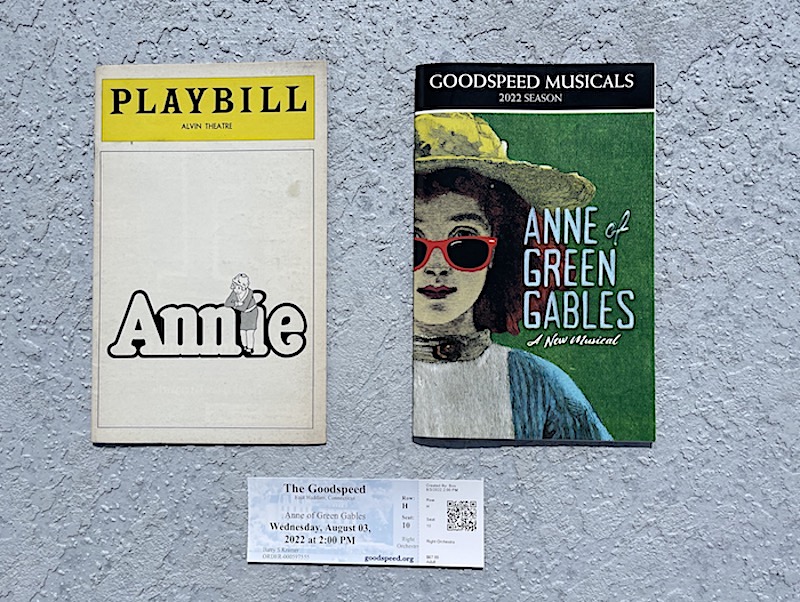 An interesting fact about the Goodspeed Opera House was that it never actually hosted any operas.  From its beginning, it was a place for dramatic and musical theater productions.  The actual structure had a long history of use but sadly fell into disrepair through the early 20th Century.  In 1954, local people formed a non-profit organization called Goodspeed Musicals and set about restoring the iconic structure along the Connecticut River.  After four years, the Opera House reopened and quickly became a premiere place for preserving the legacy of American Musical Theater and incubating the development of new musicals.  Over the years, Goodspeed has been the tryout location for over 20 musicals that eventually opened on Broadway.

In addition to Annie, the Goodspeed Opera House also premiered two of my favorite musicals, Man Of La Mancha and Shenandoah.  On the day I visited, I saw a new musical based on the beloved children’s book, Anne of Green Gables.  My experience was memorable from beginning to end.  The drive to the Opera House took me along tree-lined roadways and through small New England towns.  I crossed from the west side of the Connecticut River over the Swinging Bridge at East Haddam.  The bridge frequently opens, and I was lucky to get across before a delay. 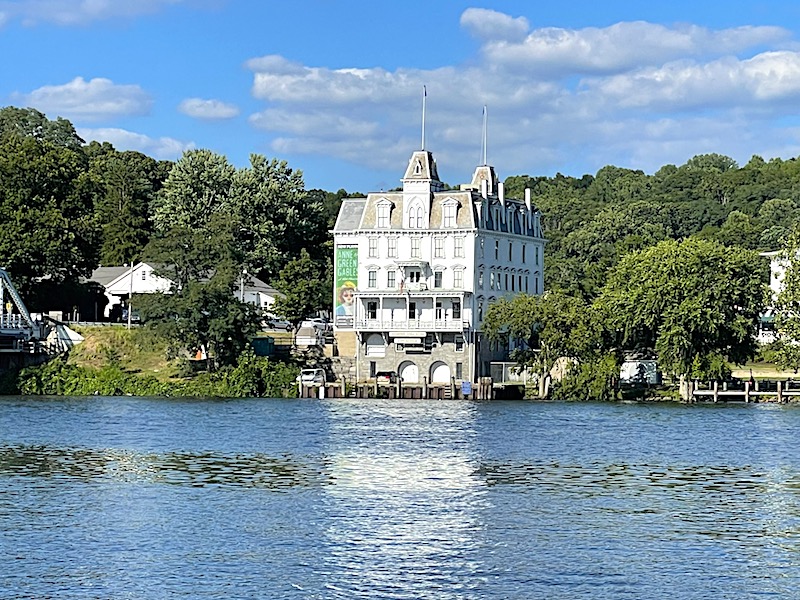 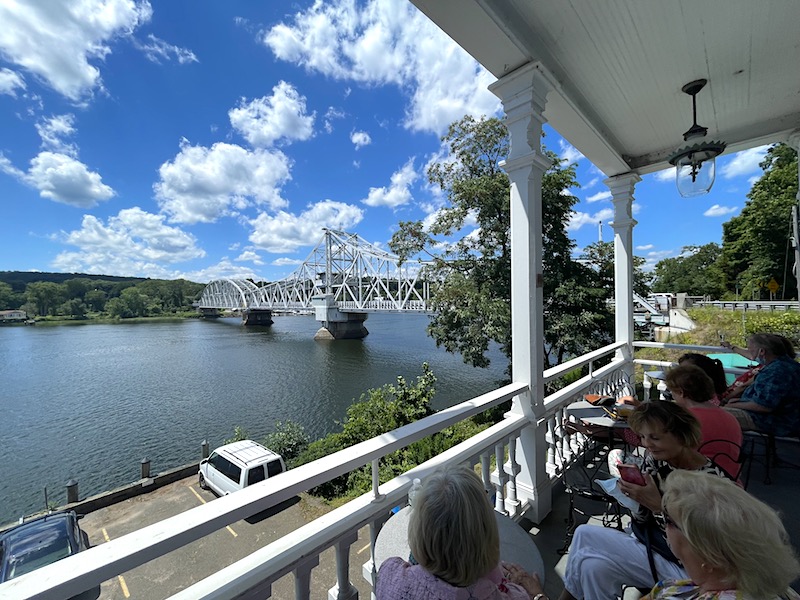 The Opera House is on the east side of the river in the charming town of East Haddam.  At the entrance of the theater, guests were ushered into the first floor, where we were able to get drinks and souvenirs and view two Tony Awards presented to the Goodspeed Musicals Organization.  The pre-show waiting area was small and became quickly crowded.  There was a small porch in the back that had a scenic view across the Connecticut River, but it was also crowded with patrons who had arrived much earlier than me. 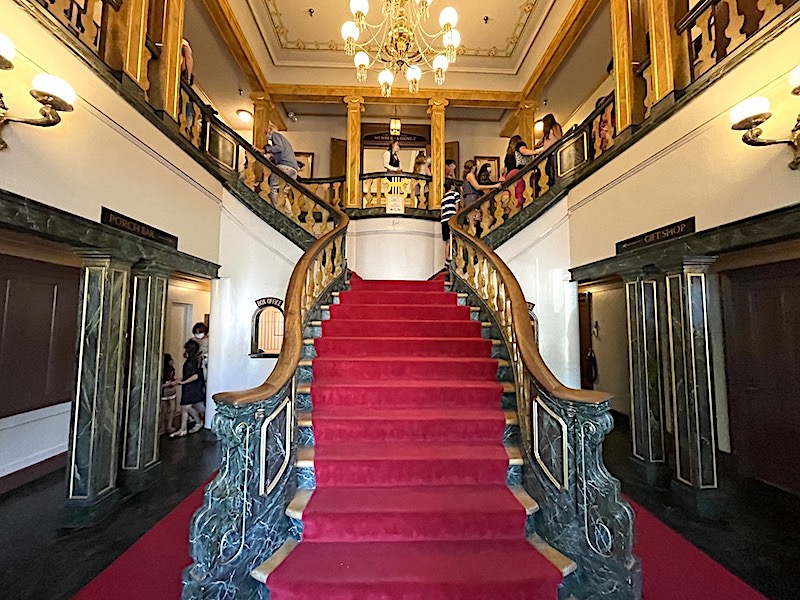 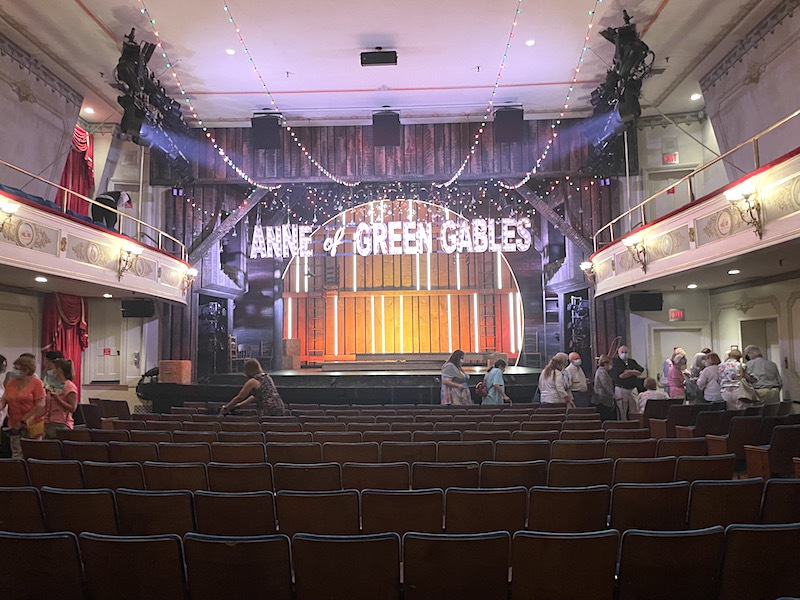 Eventually, the main theater was opened, and we made our way up an elegant red-carpeted stairway.  The second floor contained a theater members’ lounge and restrooms.  The actual performance space was on the 3rd and 4th floors at the top of the Opera House.  After climbing another flight of stairs, I reached the orchestra seating area to find a 398-seat 1800s-restored theater with a small overhanging balcony.  Every seat in the house was close to the stage and the performers.  The next two hours were pure enchantment, and after two acts and an intermission, I felt sadness in having to leave so soon.  I resolved to return and see more. 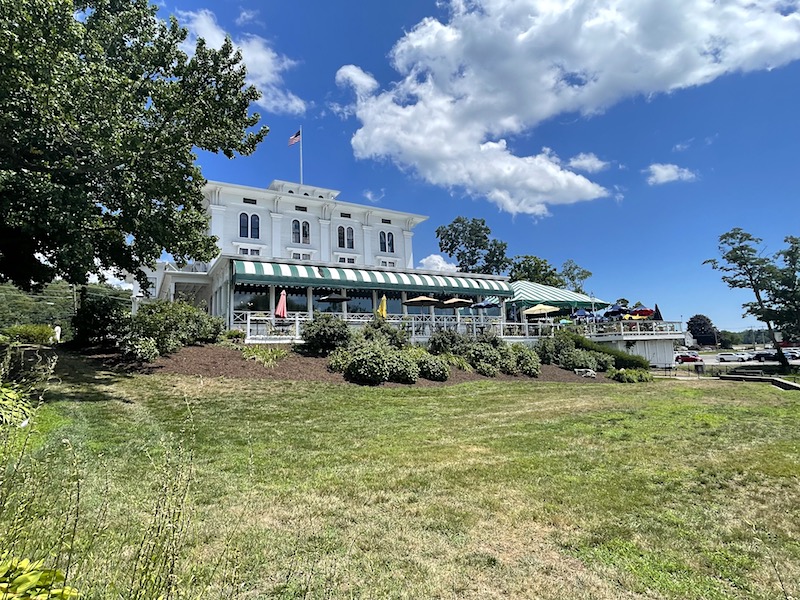 The Goodspeed Musicals performing season runs from May through September.  They also feature a holiday production in November.  You can sign up for their email newsletter to find out about upcoming shows.  Reservations are a must because many of the seats are purchased early through season subscriptions.  Next door to the theater was the historic Gelston House Restaurant and Inn, which had an inviting outdoor patio and traditional indoor seating.  The restaurant, which is owned by the Goodspeed Opera House Foundation, is a perfect place to eat lunch or dinner when seeing a performance at the theater.  Again, reservations are a must. 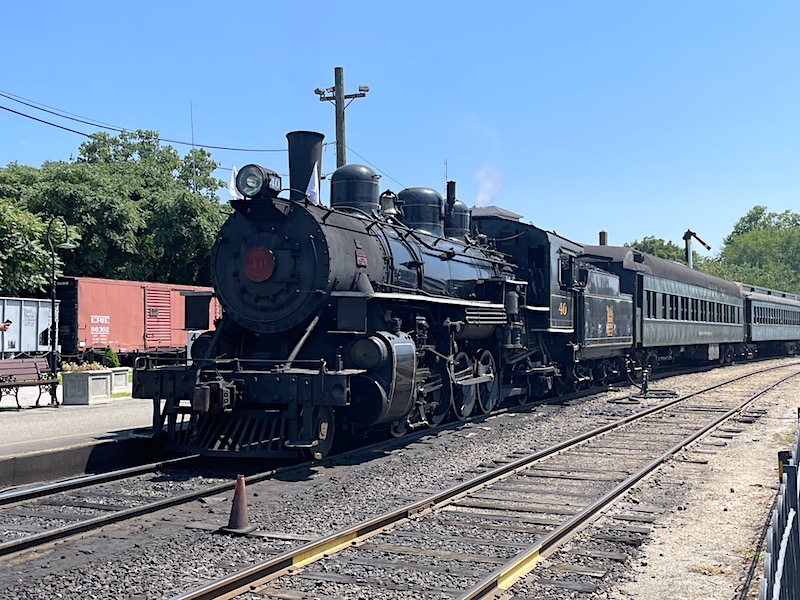 Further down the Connecticut River was another must-see gem.  The Essex Steam Train and River Cruise were two experiences packaged into one.  Throughout America, many heritage railroad organizations restore and preserve old steam locomotives, rail lines, and passenger cars.  Many of these are staffed by volunteers who dedicate countless hours to preserving America’s rail history.  Almost every state has at least one heritage line that provides visitors with an opportunity to experience what train travel was like years ago. 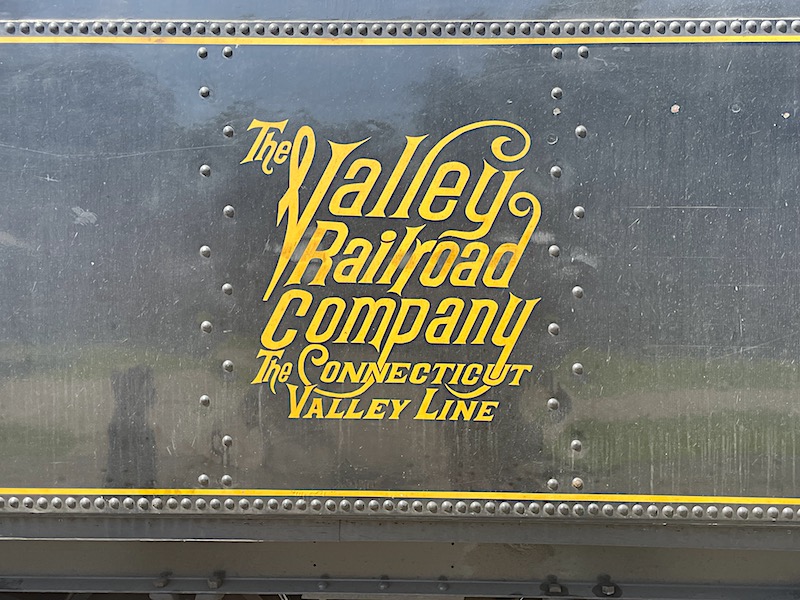 The Essex Steam Train, which originates in Essex, Connecticut, runs on the former route of the Valley Steam Line.  The line boasts four authentic steam locomotives and a variety of passenger cars.  Passengers can choose between regular coach cars and one first-class car with more comfortable seating and beverage service. 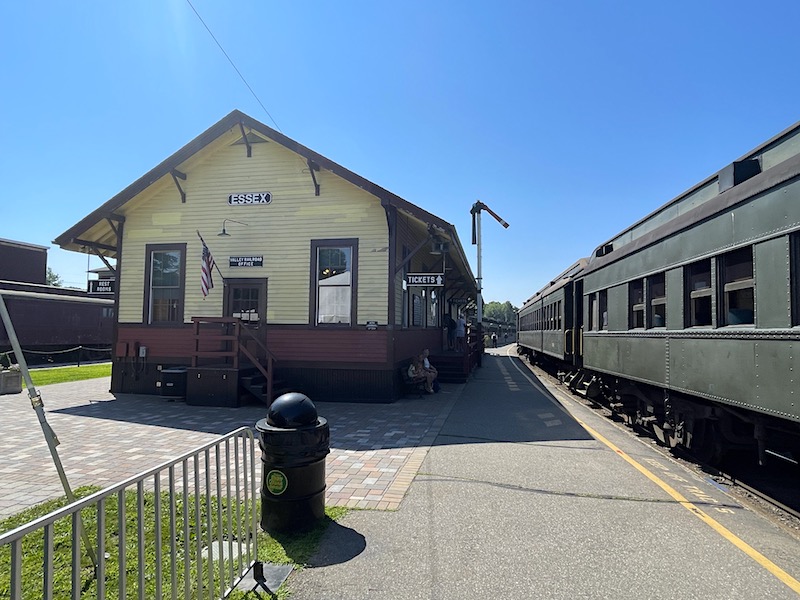 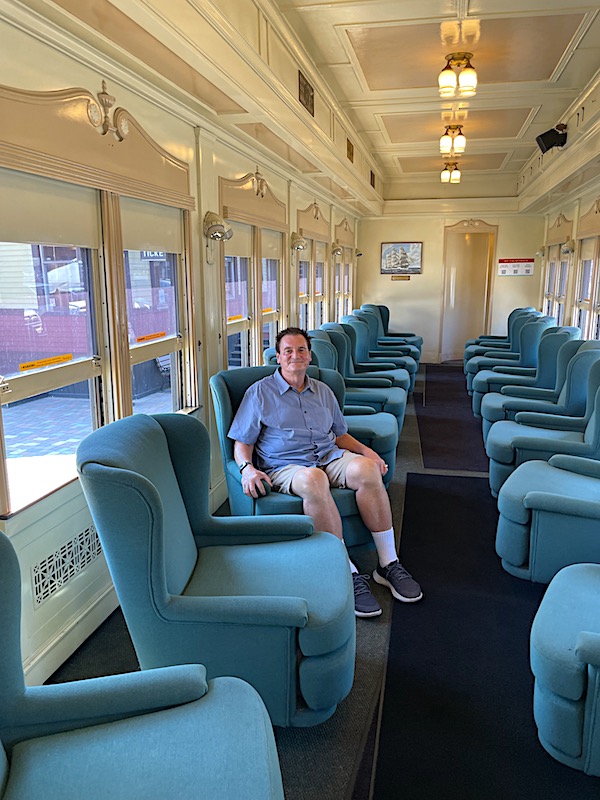 I made an online reservation for the combination steam train excursion and riverboat ride.  Upon arrival at the railroad depot, I visited the ticket office and secured the entry that I purchased online.  About 10 minutes before our departure, we were allowed to board the train and take our seats.  I rode in the restored Pullman car that was comfortably outfitted for first-class travel. 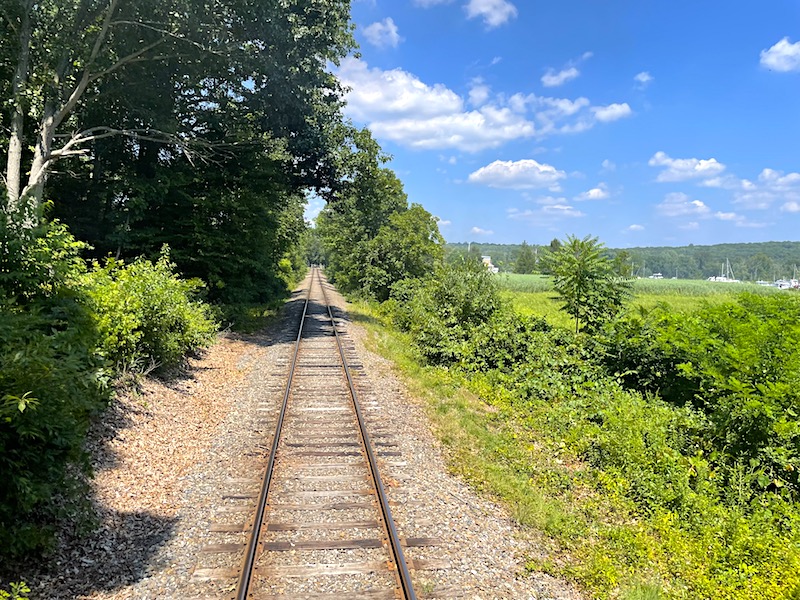 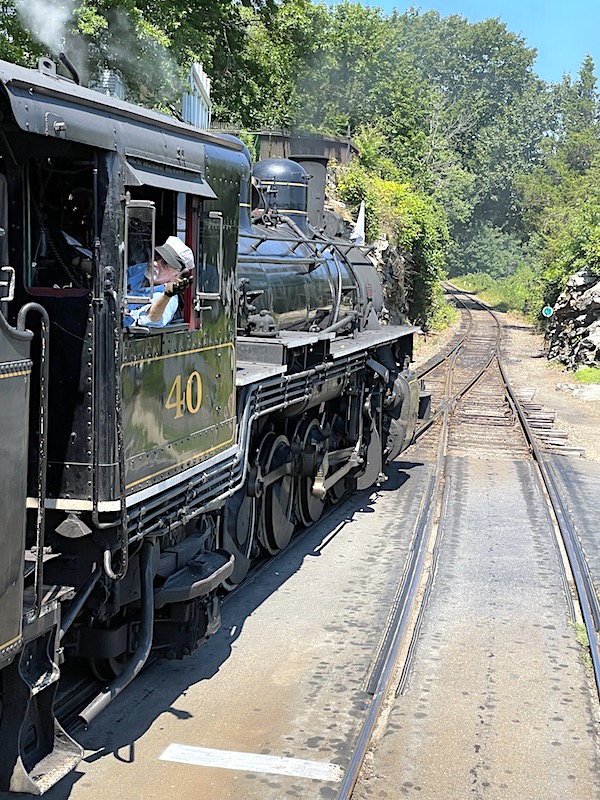 The train journey moved slowly northward near the Connecticut River along a tree-lined railway through the small New England towns of Deep River and Chester.  Occasionally there were scenic views of the Connecticut River, forests, and tidal wetlands.  The opened-window railroad cars were comfortable even though it was a warm New England summer day.  I had a drink and talked to some fellow passengers.  The ride was narrated all along the route, and photographic spots were pointed out for those who wanted to take scenic pictures. 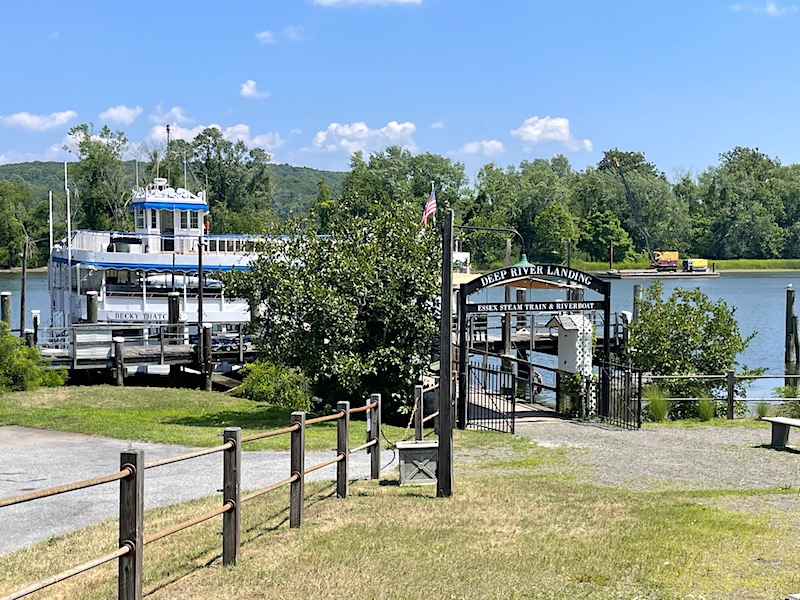 Midway through the excursion, the steam train stopped at the Deep River Landing Depot along the Connecticut River to allow passengers to take a one-hour cruise on a riverboat called the Becky Thatcher.  The tourist boat was a modern version of an old riverboat designed to hold a full trainload of passengers.  The river cruise traveled along a scenic stretch that included some state parks, marinas, coves, inlets, marshes, rocky shorelines, and the Gillette Castle. 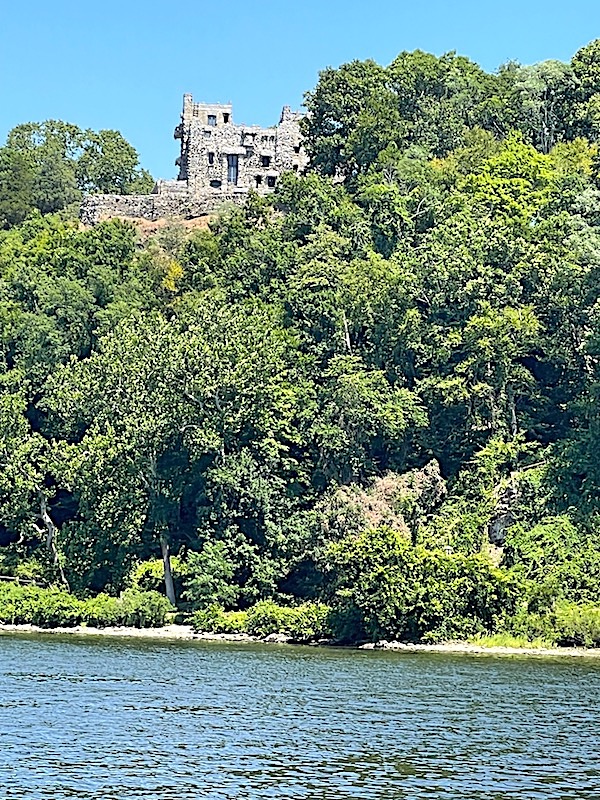 The stately home of William Gillette is now the feature attraction of Gillette Castle State Park, which also has a museum and visitor’s center.  The 3-story, 24-room manor was perched on a cliff along the Connecticut River.  The castle has a distinct artistic medieval gothic style.  There is nothing else like it, and the river afforded the perfect location for taking scenic photographs.  Our journey on the Becky Thatcher made its way up the Connecticut River to the Swinging Bridge and Goodspeed Opera House at East Haddam.  Almost the entire cruise was narrated, and it was a leisurely way to spend a warm summer afternoon.  I can only imagine that this area would be spectacularly beautiful during autumn when the leaves change color.

Afterward, all the passengers on the boat disembarked to take the steam train back to Essex Station.  We discovered that while we were traveling on the riverboat, the train had returned to the station to get a new trainload of passengers who were waiting to embark on the cruise as we left.  The train ride back followed the same route as before and seemed to pass quickly.

At the station, we disembarked, and the train was made ready for a new group of passengers.  Overall the train journey and boat cruise took about 2 hours and 15 minutes.  At the station, there was a gift shop and an area where food could be purchased.  The site also had many train cars from other railroads and a workshop for repairing and refurbishing their rolling stock and engines.  While there, I saw mechanics working on a special locomotive that will be used for December holiday excursions. 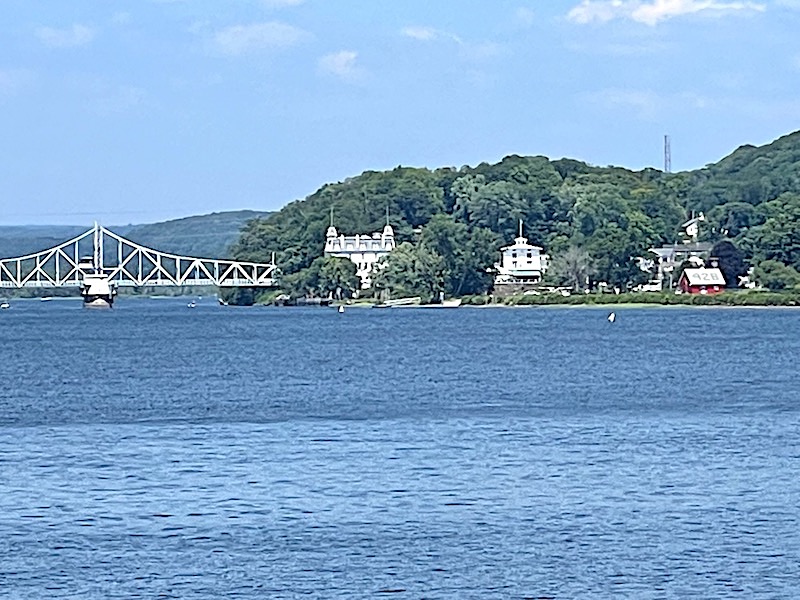 Along the Connecticut River are several other historic sites.  Previously I had the opportunity to visit and write about the uniquely scenic granite Thimble Islands archipelago near Stony Creek in Long Island Sound.  I have also visited the towns of Mystic and New London on multiple occasions.  In fact, for this trip, I made Mystic my home base.  Eventually, I hope to visit places such as the Mark Twain Museum in Hartford as well as the Connecticut River Museum and Ivoryton Playhouse in Essex.   Other popular nearby attractions are the Submarine Force Library and Museum in Groton, the Florence Griswold Museum in Old Lyme, the Eugene O’Neill Theater Center in Waterford, Eugene O’Neill’s Monte Cristo Summer Cottage, and the Lyman Allyn Art Museum, both in historic New London.

I waited too many years to visit the Goodspeed Opera House, and I’m sure I missed many great shows.  As a fan of heritage railroads, I also wish I had known about the Essex Steam Train much earlier.  Both attractions are truly historic gems, which you should visit if you are traveling in this area of the United States.  Autumn weekends are especially popular in this area due to the beauty of the changing leaves.  Do remember to make reservations regardless of the time of year you travel.  Whether you enjoy historic architecture, musical theater, heritage steam trains, or a leisurely boat ride, there is something for everyone to enjoy along the historic and scenic Connecticut River. 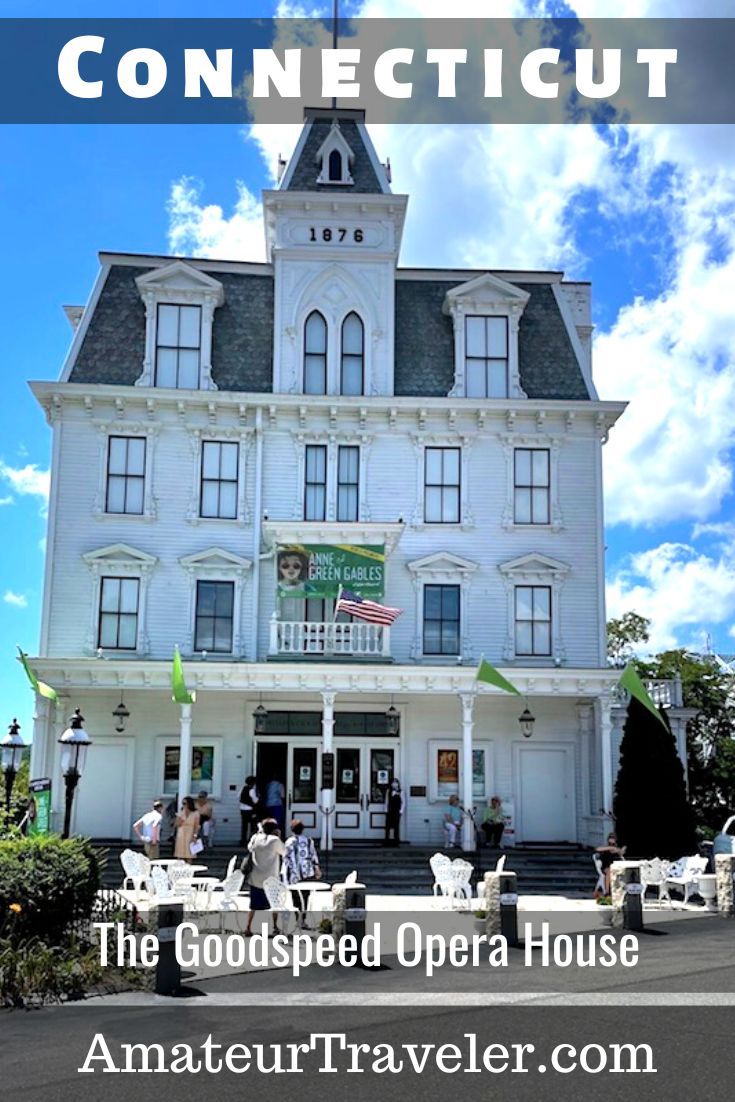 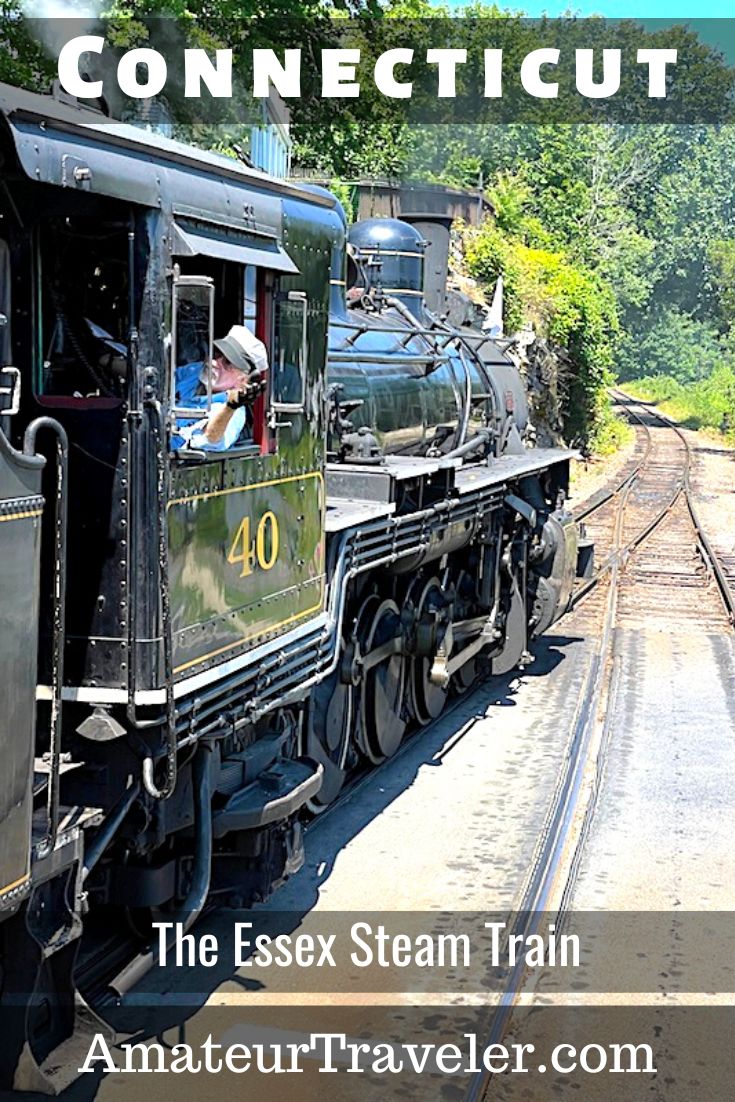 Things to do in Volos, Greece and the Pelion Peninsula