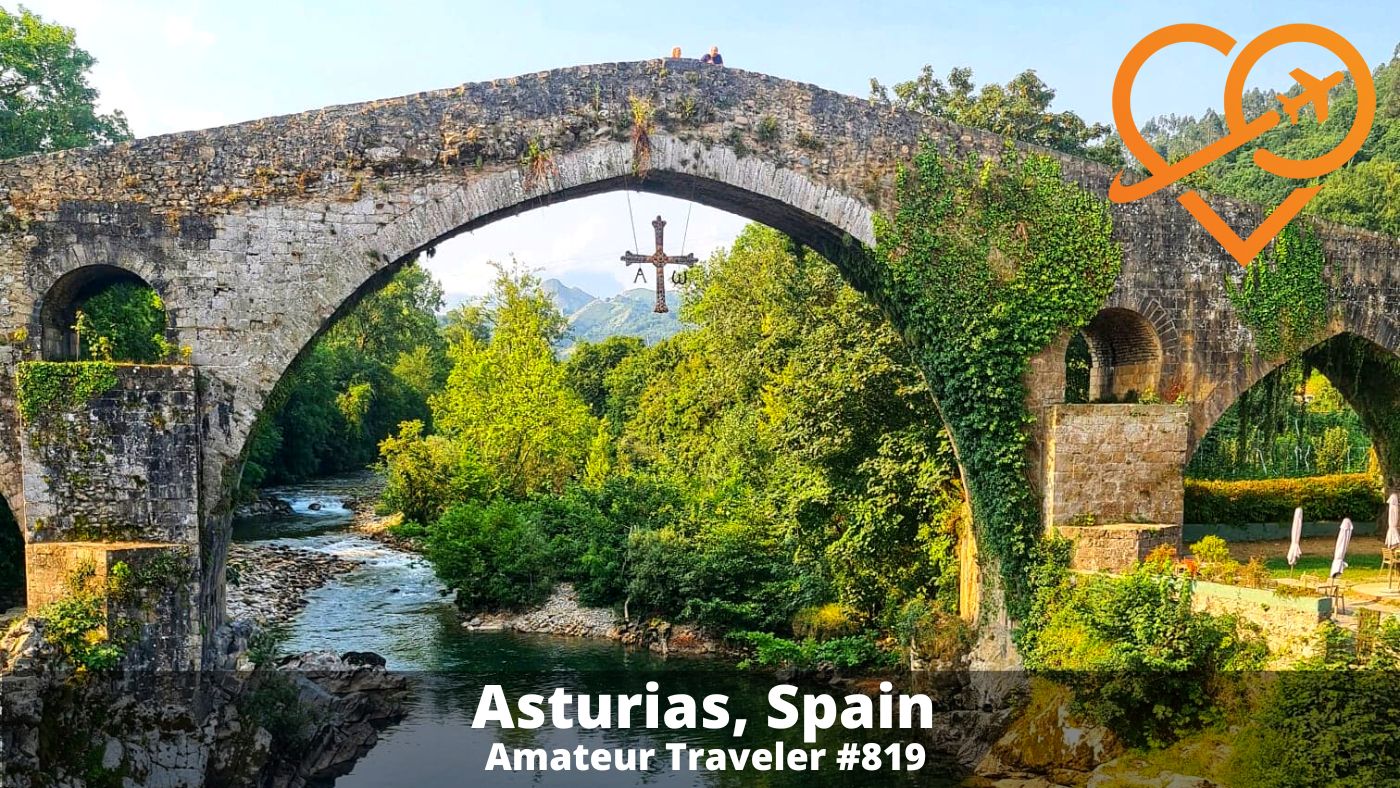 Hear about travel to Asturias, Spain, as the Amateur Traveler talks to Leanne and Lyle from BeachTravelWine.com about this less-visited region of Northern Spain.

They say, “We found we’ve been from one end of Spain to the other, and we just found Asturias is the most fascinating place that doesn’t even feel like you’re in Spain. There’s history, mountains, rivers, churches, and food. It’s just so many different things that happen in Asturias that you don’t find anywhere else in Spain. Unbelievable value for money.”

Leanne and Lyle based themselves in Oviedo and got around via tours and public transportation. As Australians, they did like the idea of driving on the right-hand side of the road. In Oviedo, they recommend a visit to the cathedral as well as the Monastery of San Vicente de Oviedo, where you can buy biscuits (cookies) from the cloistered monks. On Calle Gascona, you can find a series of ciderias, where even pouring the cider is done as a form of performance art. La Foncalada is a fountain from the 9th century. It is part of a UNESCO site of Asturian Pre-Romanesque sites.

Next, they headed out on a tour to the Picos de Europa (Peaks of Europe) national park. This is a dramatic range of mountains that helped protect this region from the Moorish invasions of Spain. On the way, they stopped at an old Roman Bridge at Cangas de Onis. They then visited the mountain Lakes of Covadonga as well as the Basílica de Santa María la Real de Covadonga. The basilica is a church from the late 1800s which is located near the Holy Cave, where the Virgin of Covadonga was venerated.

The next day, Leanne and Lyle recommend a visit to Monte Naranco and the churches of Santa María del Naranco and San Miguel de Lillo. These 9th-century churches are also part of the Asturian Pre-Romanesque UNESCO site. While visiting the area, they stumbled upon a Tuna band, a group of university students wearing traditional outfits and playing traditional music.

There are also many seaside cities, villages, and beaches on the coast. They visited the city of Gijón, which is the largest city in Asturias and is on the coast. This area is part of the Costa Verde (Green Coast) of Spain.

They did not get a chance to visit the “cheese caves” in the area because they did not hear of them until after their visit.

Asturias has many outdoor activities like kayaking and hiking. It is rich in history, and its Celtic roots give it a different flavor from much of the rest of Spain.

Aside from your wrap-up questions, the most common things I’ve heard on your podcast (about almost everywhere in the world) are:

1. The people are wonderful
2. The food is great
3. There is so much to do

Could you compile a list of the places that are exceptions to this pattern?  Tell us where the people are jerks, the food is bad and there isn’t much to do.

Solana Network Is Now Live Following An Outage On 30 Sep

Fun Things to do in Downtown San Jose at Night