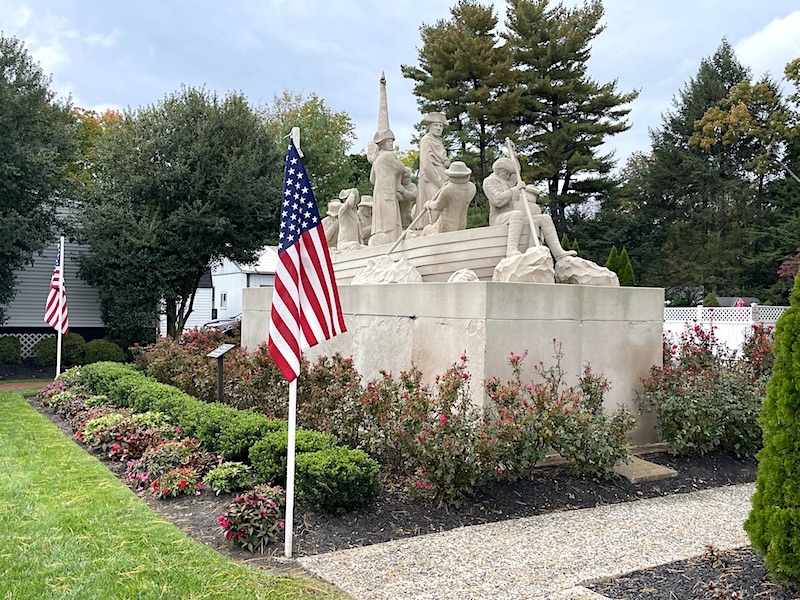 A statue based on Emmanuel Leutze’s famous painting of George Washington crossing the Delaware River near the historic park.

On both sides of the Delaware River are two state parks dedicated to an event that occurred on Christmas Day in 1776.  On that date, General George Washington led about 2400 tired and poorly equipped soldiers in a surprise attack on a garrison of 1500 Hessian mercenary soldiers who were wintering in Trenton, New Jersey.  Washington’s Army began their journey in McConkey’s Ferry, Pennsylvania, and crossed the ice-choked Delaware River to eventually surprise the Hessian soldiers and score a critical morale-building victory. 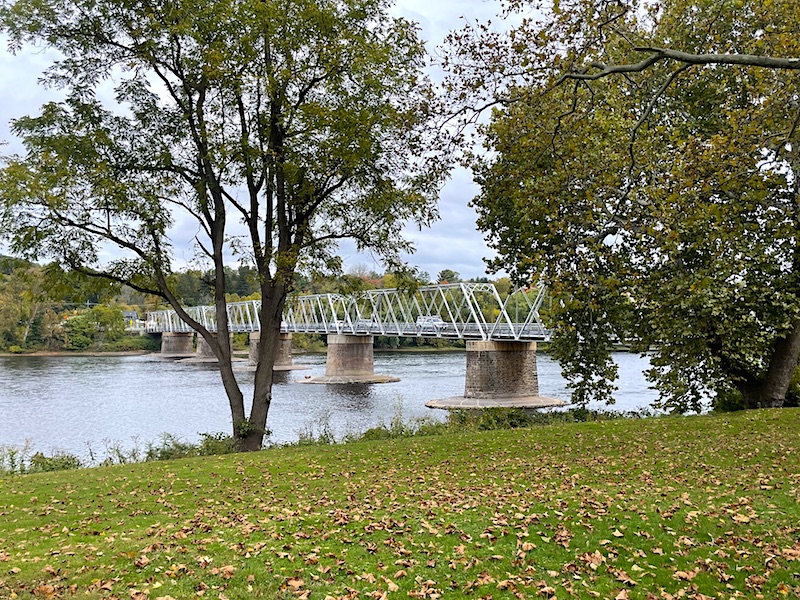 As an elementary school teacher, I enjoyed telling that story over twenty-five times to students in the location where it occurred.  It’s a moving story of overcoming hardship and risking all to keep a floundering movement alive.  Inevitably at the end of my presentation, there was always one student who would put up a hand, point to a nearby steel bridge, and ask, “Why didn’t they just use the bridge over there?”  Of course, McConkey’s Ferry was a very different place two hundred forty years ago.

The History of Washington’s Crossing

The American War for Independence was not going well for the American forces back in December of 1776.  They had lost critical battles in and around New York City and were chased by the better-equipped British through the colony of New Jersey.  Eventually, General Washington decided to seek safe territory by crossing over the Delaware River into the colony of Pennsylvania.  In a brilliant move of forethought, he commandeered all the boats up and down the river for many miles.  Back in 1776, there were no bridges crossing the Delaware River, only a series of small independently run ferry crossings.  Securing all the boats provided Washington’s Army with the safety they needed to avoid an imminent British attack.

During December, Washington’s army was in poor shape and conditions were getting worse.  By the new year, the enlistments for many of his soldiers would end.  Poor equipment, disease, humiliating losses, and dwindling spirits did not make for a promising future.  Washington knew he needed a morale-boosting victory.  Along with his advisors, he developed a plan to make a daring nighttime crossing of the Delaware River and capture the Hessian forces in Trenton, New Jersey.  It was a risky scheme, but it had the potential to give him the critical victory he needed to keep his troops dedicated to the cause.

Washington decided to make his move on Christmas day knowing that the Hessians were celebrating and most likely would not be ready for a major fight.  Facing poor weather and an icy river, Washington counted on the element of surprise to give him an advantage.  His troops made the crossing, surprised the Hessians, and gained a critical victory.  Thus began one of America’s most famous independence stories.

Today, that event is commemorated by state parks in both Pennsylvania and New Jersey.  Together, both parks form the Washington Crossing, U.S. National Historic Landmark area.  The parks are well maintained and offer visitors great insight into what happened before, during, and after Washington’s famous midnight maneuver. 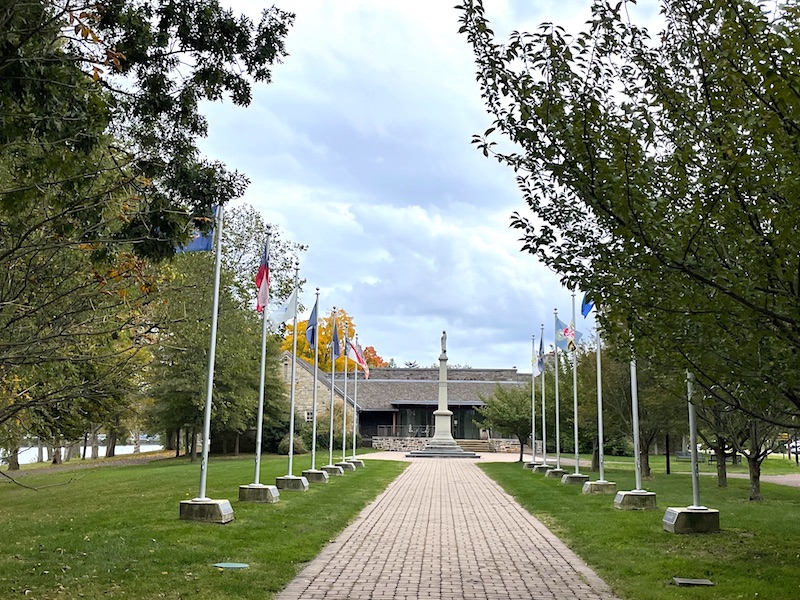 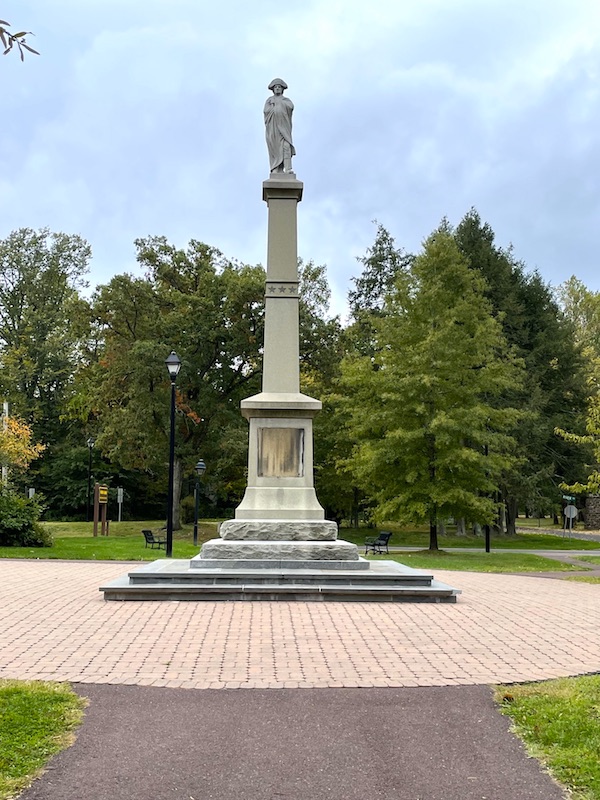 The lower park, located in the community of Washington Crossing, features a Visitor’s Center and 13 historic buildings. The most famous structure is the McConkey’s Ferry Inn where General Washington and his aides made plans before the crossing. 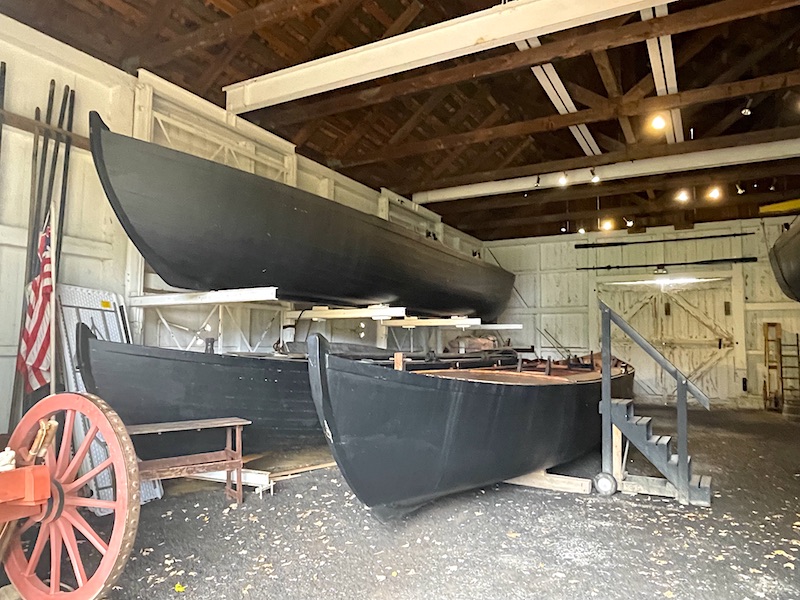 Another popular building is a 20th Century barn that houses 5 replicas of the sturdy Durham boats that were designed to transport pig iron.  These and other watercraft were used to transport soldiers, artillery, and horses during the famous crossing. 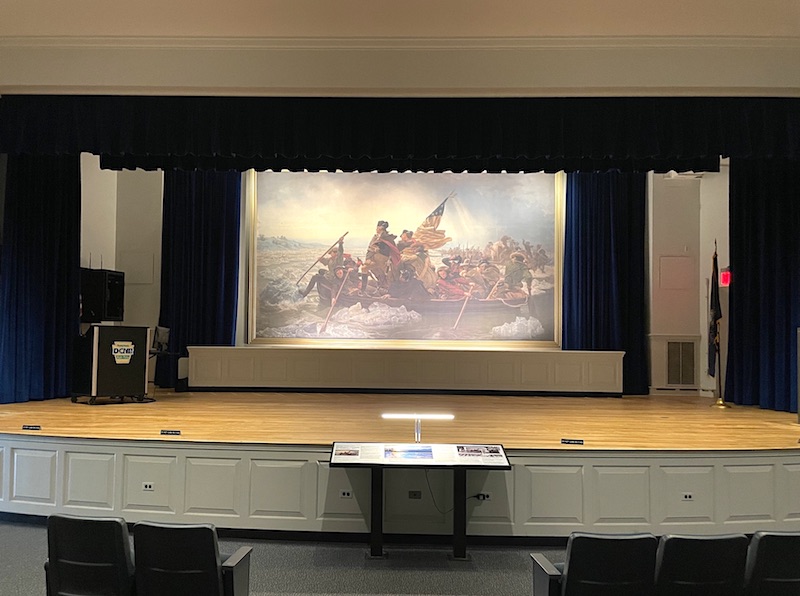 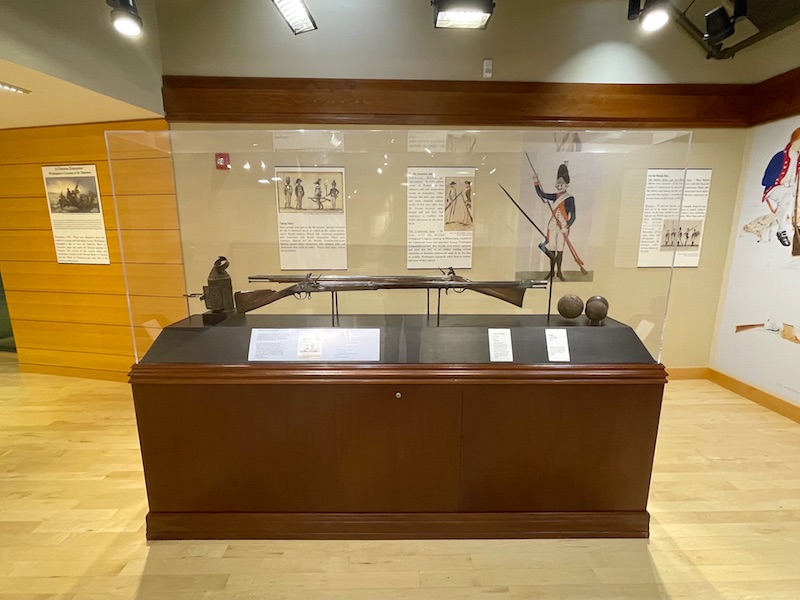 The Visitor’s Center features a film about the crossing along with a digital full-size replica of Emanuel Leutze’s 1851 painting of Washington Crossing the Delaware that is currently displayed in New York City’s Metropolitan Museum of Art.  There is also a small museum that features artifacts from the time of the crossing along with exhibits about the different people who served in Washington’s Army. 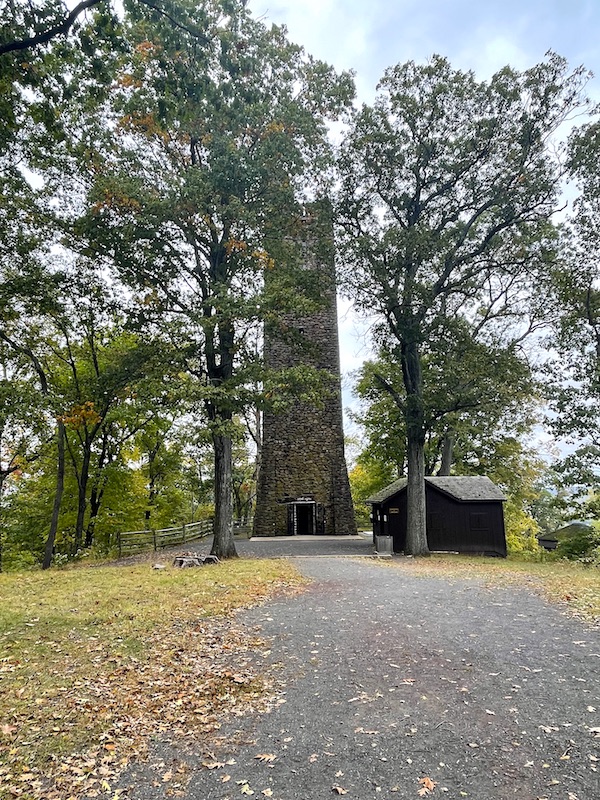 Driving about 4 miles north along the Delaware River accesses another section of the park.  It features a scenic lookout called Bowman’s Tower along with a wildflower grove.  Here visitors can also see the Thompson-Neely Farmstead, which was used as a military hospital during Washington’s encampment. 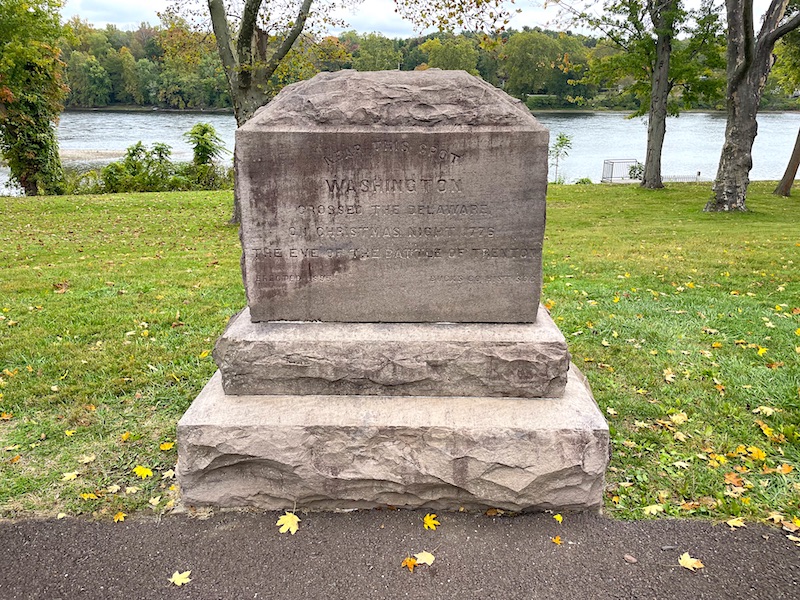 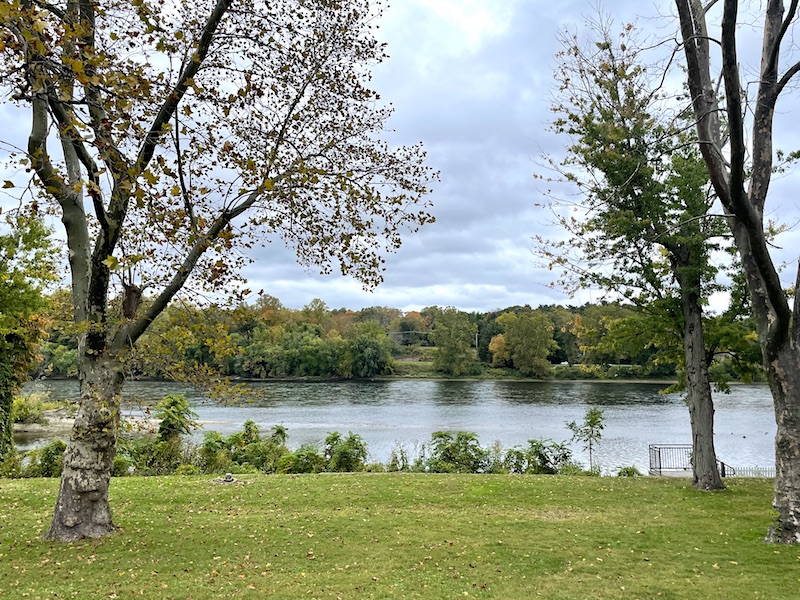 New Jersey’s 3,575-acre Washington Crossing State Park focuses on telling the story of what happened once Washington’s Army arrived on the other side of the river.  It was created in 1912 and is maintained by the New Jersey Division of Parks and Forestry and supported by the Washing Crossing Park Association citizen’s group.  On the New Jersey side, the corresponding ferry operation was known as Johnson’s Ferry. 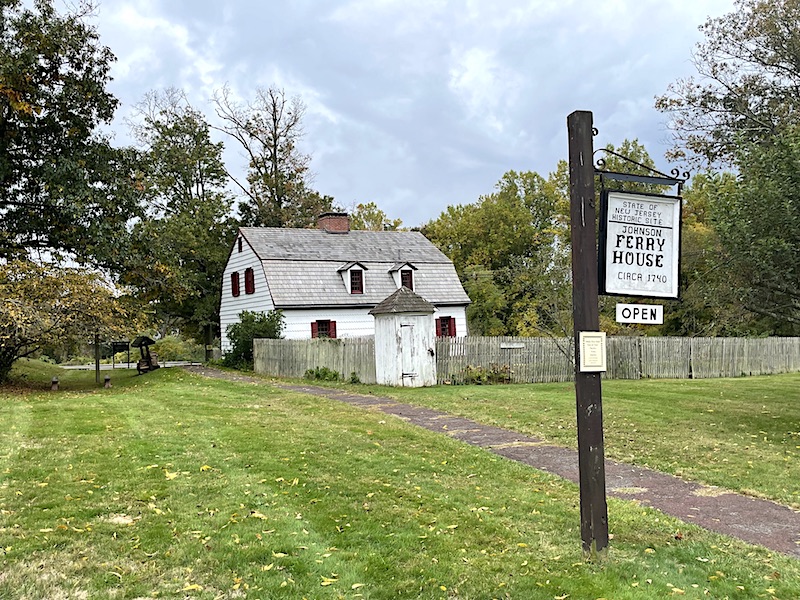 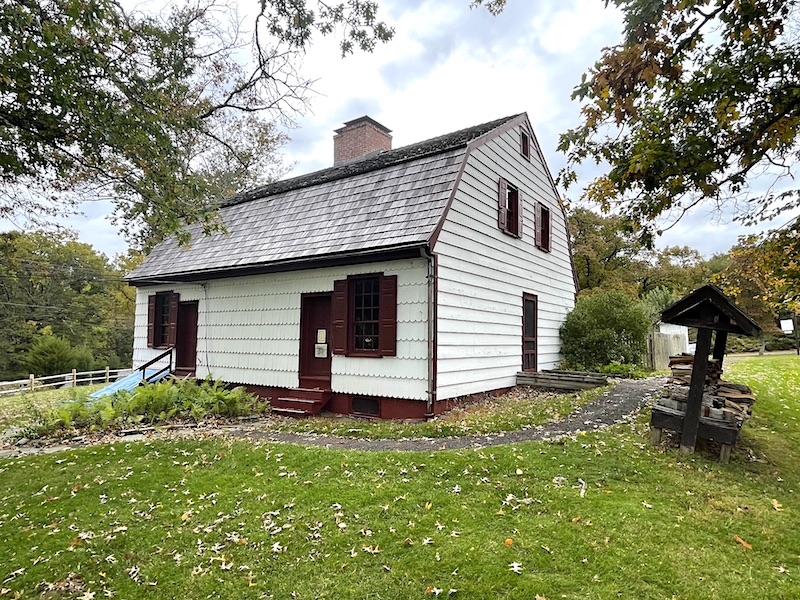 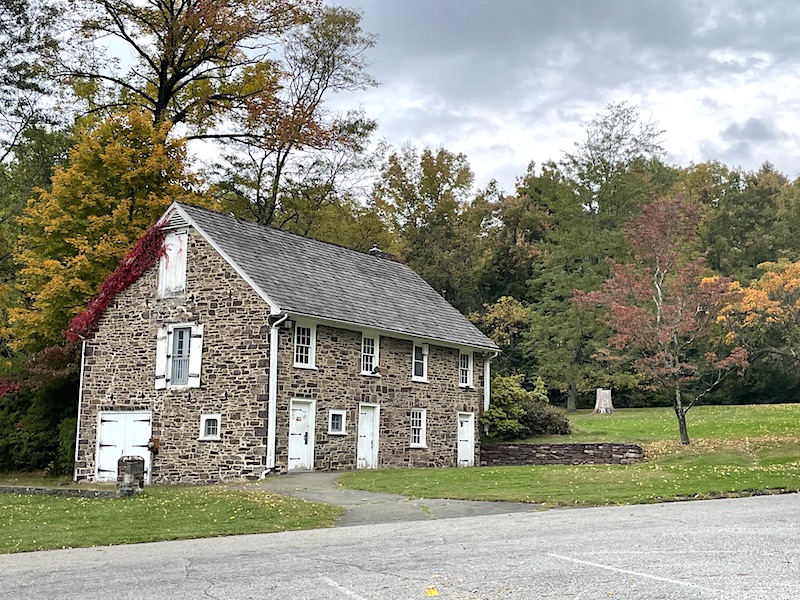 Visitors can experience a living history presentation at the Johnson Ferry House which features a colonial garden, farmhouse, and an 18th Century tavern complete with a bar and protective grill.  Another historic building along the Delaware River is the Alexander Nelson Tavern, which features a replica of a flat-bottom ferry boat that was used at this location. 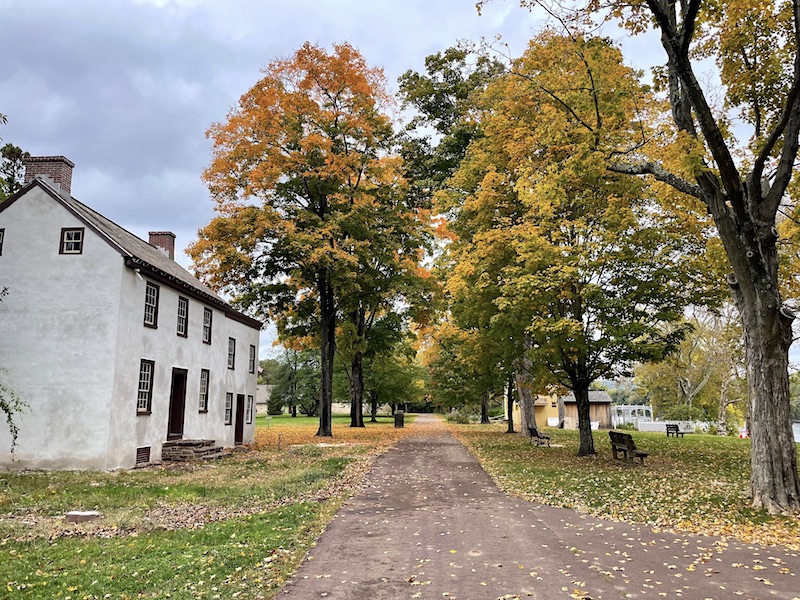 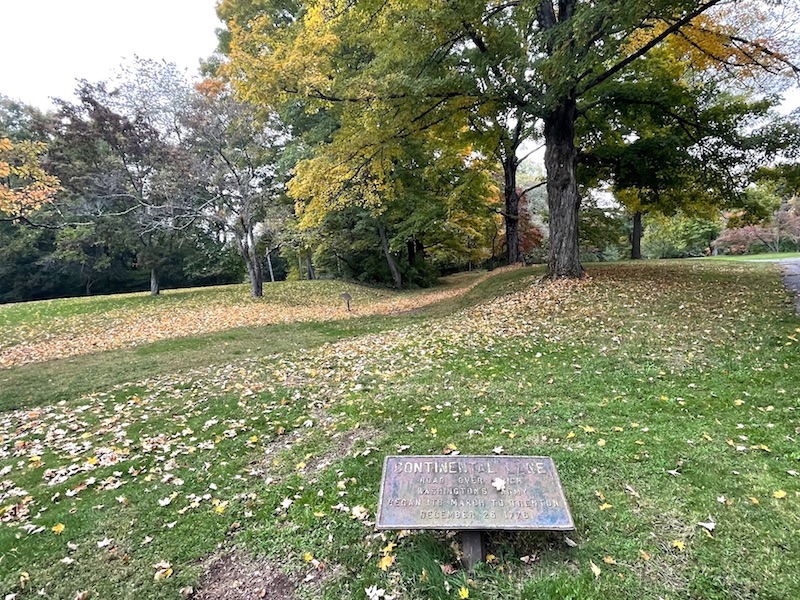 The historic marker at the beginning of the Continental Trail which follows the path Washington’s Army took to Trenton, NJ

On the New Jersey side of the Delaware River is a hiking pathway called the Continental Trail that marks the route Washington’s Army marched on their way to attack the Hessians in the city of Trenton.  Hikers can follow that same route today.  The park also has a Visitor’s Center that features a historical movie called “Ten Crucial Days” and a museum that contains the 700-piece Harry Kels Swan Collection of Revolutionary War artifacts.  On select days, the park staff also presents living history demonstrations that include uniformed soldiers and musket firing demonstrations. 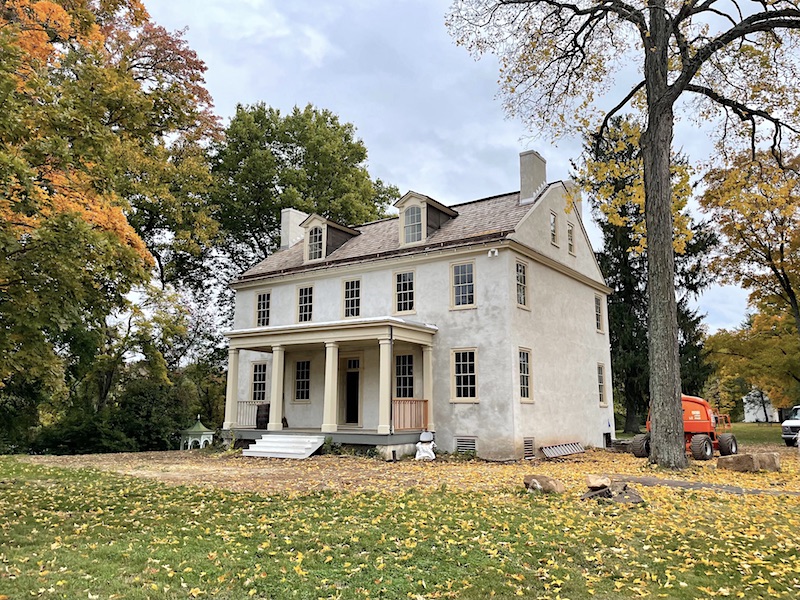 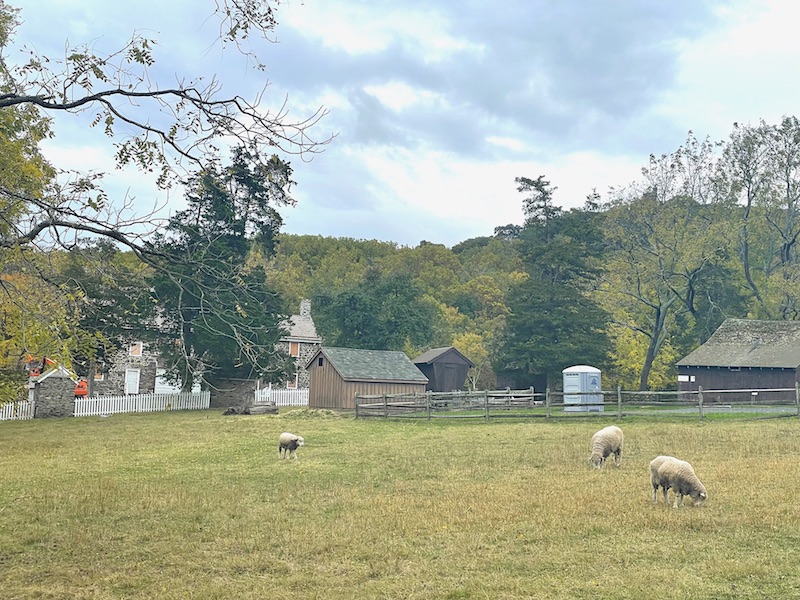 On both sides of the Delaware River are canals that were used for shipping raw materials and goods from northern Pennsylvania to major cities in both states.  On the Pennsylvania side is the 60-mile-long Delaware Canal.  New Jersey features the Delaware and Raritan feeder canal that runs from Lambertville to Bordentown.  Both canals can be used for canoeing, kayaking, and fishing.  Along each canal are towpaths that are excellent for bicycling, hiking, jogging, and horseback riding. 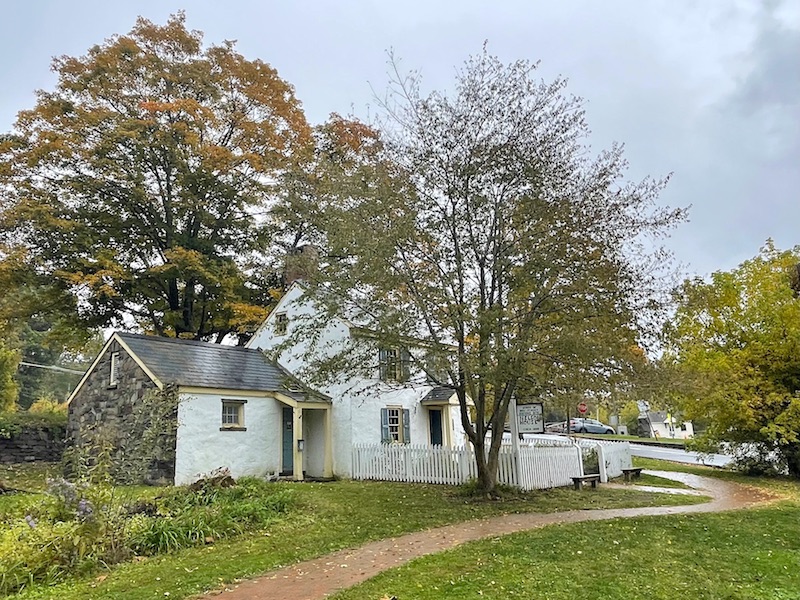 Both parks are open every day of the year, from sunrise to sunset, and feature various history-related events, demonstrations, and encampments.  Pennsylvania’s park offers ticketed daily tours of the historic area.  Summers are the most active and weekends are the busiest with visitors.  The parks have limited events throughout the winter months.

When I visited on a weekday during the second week of October, I experienced only a handful of people.   Visitors can reach both parks by driving about an hour north of Philadelphia or two hours west of New York City.  They are close to Interstate 95 and make for a scenic day trip.  The quaint and picturesque riverside towns of New Hope and Lambertville are north of both parks.  Connected by a walkable bridge, both communities feature numerous restaurants and eclectic shopping opportunities. 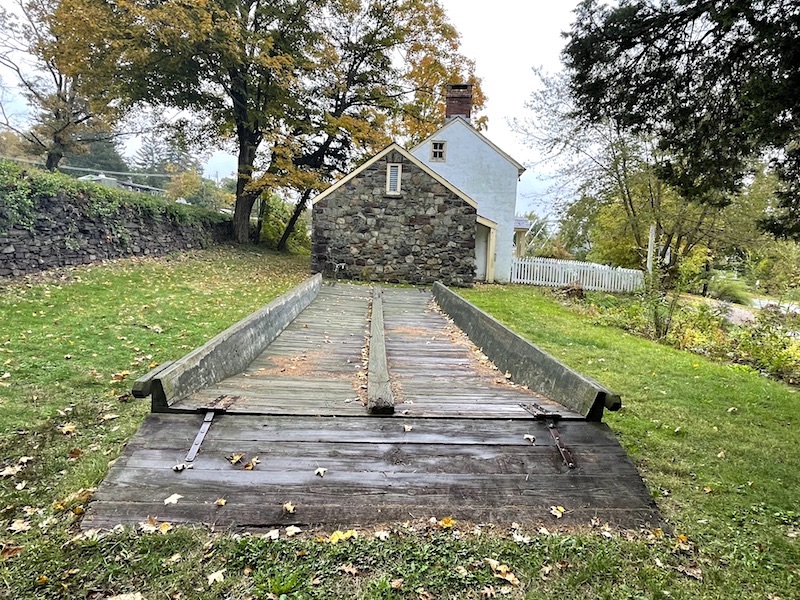 Other Revolutionary War Sites Nearby

There are numerous Revolutionary War attractions within an hour’s drive of Washington Crossing.  Less than an hour away is Valley Forge, Washington’s famous winter camp.  In New Jersey is the Old Barrack’s Museum, often awarded as New Jersey’s best museum based on its living history presentation on the people and events associated with Washington’s march on Trenton.   Outside of Trenton is the Princeton Battlefield, the site of another American victory by General Washington.  On the campus of Princeton University, New Jersey, is Old Nassau Hall where skirmishes occurred and British troops surrendered to General Washington.

New Jersey has also preserved two more of Washington’s winter camps.  In Somerville are the Wallace House and Old Dutch Parsonage State Historic Site and Morristown features Jockey Hollow and the Ford Mansion.  The Schuyler-Hamilton House where Eliza Schuyler met and was courted by Alexander Hamilton is also in Morristown.  About 90 minutes away is the Monmouth Battlefield State Park famous for a major battle between the British and Washington’s army as well as the legend of Molly Pitcher. 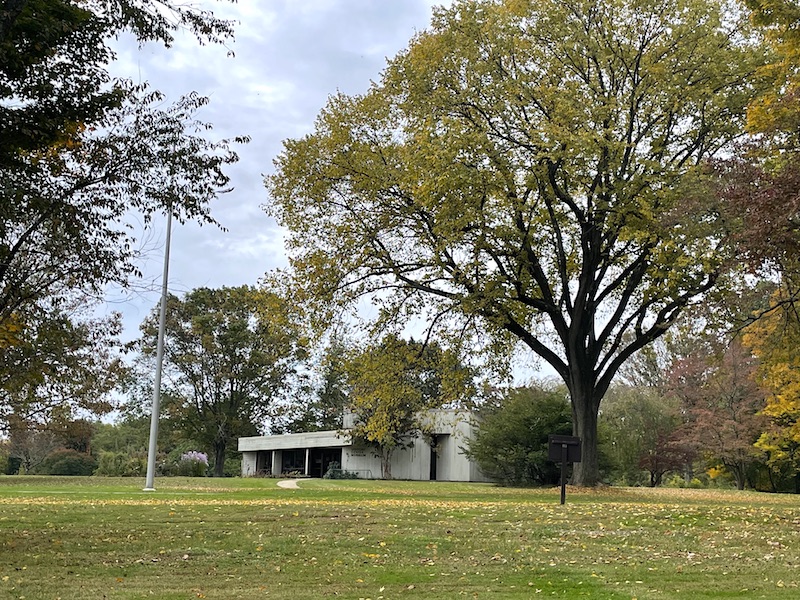 I found it exciting to stand at the actual location where the crossing began and look across the Delaware River.  The two state parks of the Washington Crossing Historic Landmark helped me understand the full story of Washington’s famous crossing by presenting the factual details of what occurred.  They are excellent places to experience American history and see actual sites that were significant in the battle for American Independence.  Even though they are in two different states, today you can easily make your own crossing by simply taking the bridge. 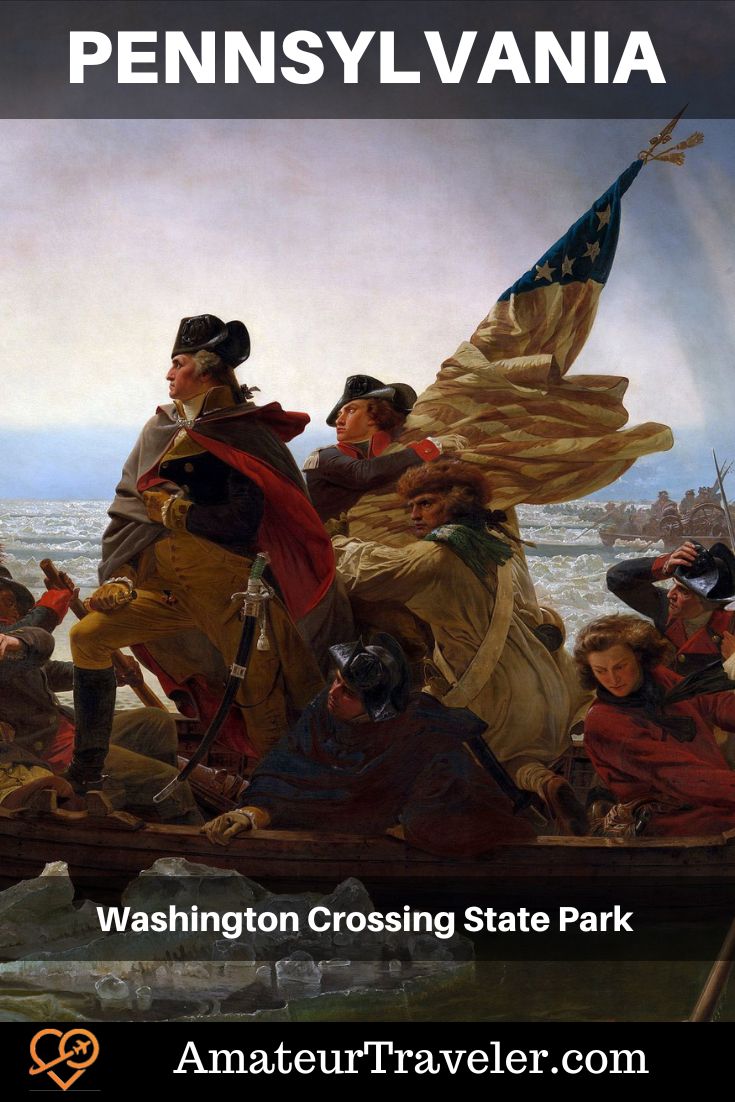 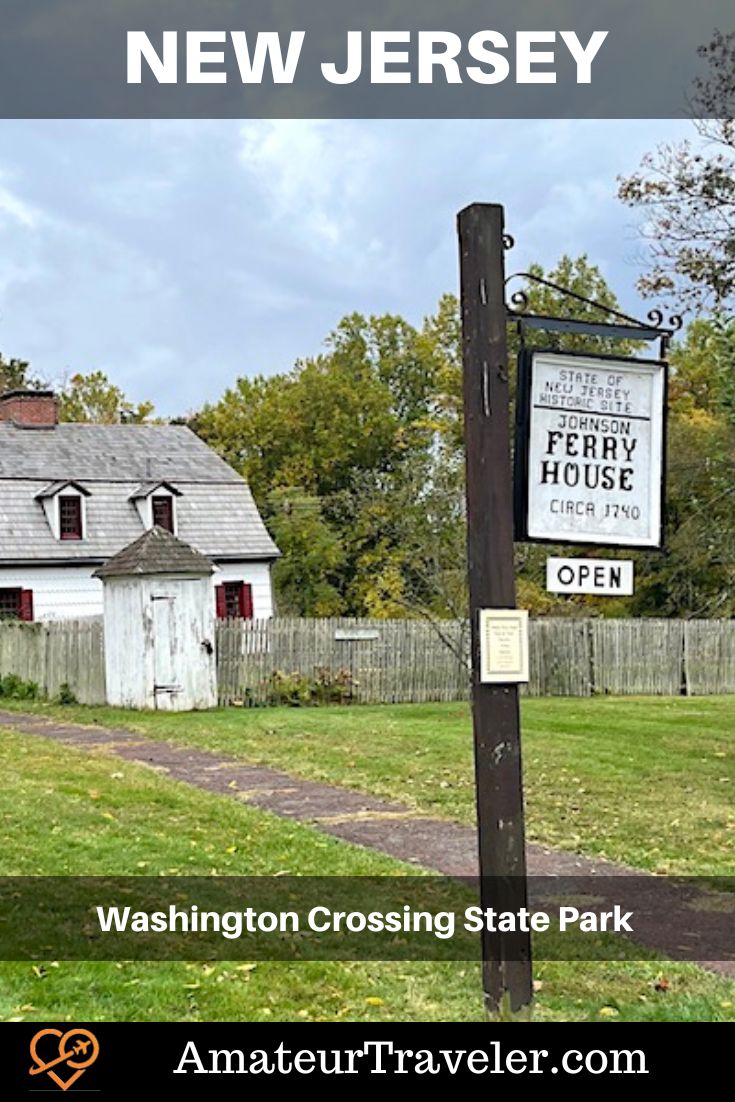